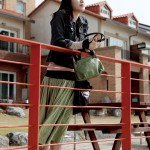 There’s a style of filmmaking, at once concrete yet elusive, that draws me in: Antonioni, certainly, who conveyed attitudes and behavior through architecture that surrounds less-than-articulate characters, and Rohmer, whose confections of conversation in fact mask intensely structured storytelling schemes.

The relatively young Korean director Hong Sang-soo, who studied at the School of the Art Institute, is one of the younger directors whose characters’ seemingly diffident or reckless behavior is in fact only an apparition of normalcy or the everyday. A male character may be unkind to the women he longs for (in virtually every Sang-soo film) or may linger in drink when confounded (cogito ergo soju, if you will), yet choices of editing rhythms, framing of locations and exchanges of glances are always so artfully arrayed it could leave the wrong audience confused. Yet there are subtleties galore, and he’s a master of the telling, mysterious image.

With “Woman on the Beach,” a title that sounds like it could hark back either to Jean Renoir or to Eric Rohmer, Sang-soo covers familiar ground as he continues to lovingly triangulate desire in lower case with explosions of frustration. Surely the 47-year-old director psychoanalyzing himself sans self-awareness (or self-wariness) in these repeated patterns and patterning that has been a strength of his little-known work, an output of eight features between 1996 and 2008, from his debut, “The Day A Pig Fell Into a Well” (an unexplained title that Sang-soo years later claimed was taken from a John Cheever short story), the only older title not available on DVD in the U.S., and which does not reveal its narrative shape until the very, very last shot, which it does with shocking symmetry and grace. Other Western notes are reflected in his films and titles, including 2000’s “ Virgin Stripped Bare by Her Bachelors,” referring to Marcel Duchamp’s sculpture, “The Bride Stripped Bare by Her Bachelors”; and 2004’s “Woman is the Future of Man,” brilliantly encapsulating that film’s protagonist’s protracted romanticism while also taking its title from radical-surrealist Louis Aragon’s poem.

There is something simple and irascible in Sang-soo’s fixations: ornery, he here turns to a plentitude of everydayness, of platinum-numbskulled repetitive behavior, ingrained narratives or innate desire and ill-proportioned mortification. Yet, unlike Woody Allen, his male characters are shown up for their self-regard, their overweening sense of entitlement, their romantic knavery that wishes to be chivalry but usually is a mirror of their own self-absorption. His central figure on the “Beach” is a film director whose career is stalled. Could he go from Rohmeresque Sang-soo-style films to accomplished action pictures like Bong Jun-hoo’s “The Host”? Hardly likely; there’s a woman in the picture. Suffering writers’ block, director Joong-rae (Kim Seung-woo) convinces his production designer Chang-wook (Kim Tae-woo) to take a trip to the west coast of the country. Chang-wook had made separate plans with his girlfriend Moon-sook (Ko Hyun-joung), and decides to bring her along. Confusion and passion erupt, with Chang-wook and Moon-sook having their own mutual appreciation society on the side. Resemblances to “Jules and Jim” shift after Joong-rae returns to Seoul and brings another woman to the resort to rediscover the romance he’d had with Moon-sook… who just happens to turn up. Sometimes a screenplay writes itself…

Sang-soo had this to say in a director’s statement: “I relied on the actual environment provided by Shinduri Beach, where I spent each day writing and filming. I worked hard to discover all that I wasn’t convinced about but wanted to express, and then to render them tangible. Repetition is a great framework and basis for filmmaking. On the other hand, if repetition is part of a person’s behavior, we can take that as an indication of obsession. I wanted to see through repetition, but also to reduce repetition.”

But, to repeat, this schematic-sounding work is all done with unassuming grace and self-deprecating humor. I recently worked my way through the DVD set of Rohmer’s “Six Moral Tales,” and marveled at the screenwriting skill, the dramatic force, underlying the waves of words, concrete yet transparent at once. Rohmer and Sang-soo accomplish similar yet parallel goals, capturing behavior in a narrative studded with misgivings, misunderstanding and musing, offering amusing self-critiques through his director-protagonist’s behavior. Yet, as he told an interviewer for Cinema Scope, “People around me gave advice, telling me that if you changed his profession, you’d grow more by exploring people different than yourself, but I didn’t listen… When I choose a character’s profession, it intrinsically forms expectations about what he can and cannot do.” Viewers who know Sang-soo’s work know what he can do, and can see what he’ll be able to do in the future, increasingly finding a way to incorporate his female characters into the cockeyed diagrams he makes of the world of desire.

“Woman on the Beach” opens Friday at Siskel.