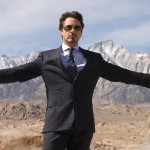 Studios seem to have a harder and harder time to make movies in familiar forms that don’t seem… familiar. Yet even with well-worn elements, there’s much to enjoy in “Iron Man.”

Early reviews were biz-fixated and meta and reluctant to admire the plain simple joys and oft-sybarite wit of Jon Favreau’s direction of “Iron Man”: this fantasy film has its conflicts and incoherencies, but bears a mantel of the real world, not a chip, but the literal exoskeletal armature, upon Robert Downey, Jr.’s ropy yet weight-trained shoulders. The words in some reviews are just rehearsals for a bandy case of moralizing croup, expecting entertainment from a conglomerate to be all things to all people against all odds. Instead, “Iron Man” is classically disjunctive studio filmmaking, where the cracks in things let the light in, where lightness (and flight) is modest grace. Favreau also has a light yet mature hand with moments of performance between characters: while not feeling precisely like the work of seasoned improvisers, there’s a warm familiarity between the gewgaws that is a rare pleasure. Neither narcotic nor hallucinatory in form, Favreau’s film still bestows behavior and awareness and small smirking joys within the display of the genius of a self-involved id-on-the-run, tactile, motile, in-the-moment Robert Downey, Jr.

The hero-origin genre has developed its own familiar contours, which become an armature for a witty filmmaker like Favreau, and the seeming lifts from earlier pictures show taste (as in moments akin to Brad Bird’s “Iron Giant”) and are forgivable, even if the picture never reaches the heights of satire of Paul Verhoeven’s “Robocop.” Tony Stark is an alcoholic womanizer, from great money and power, whose Damascus road experience happens relatively nearby in the Middle East. Shit blows up, yes, real good. The mechanics of plot synopsis don’t indicate the pleasures of the movie, from a character demonstrating intelligence as a survival need and fireballs and freefalls against the night skies of Malibu, Santa Monica and Los Angeles.

Jeff Bridges’ substitute father baddie channels just enough of the self-important snowflakiness of Donald Rumsfeld to add an understated note of satire. (And he does wonders with a line like “I never had a taste for this sort of thing, but I have to admit I’m deeply enjoying this suit.”) Cinematographer Matthew Libatique’s light is as clean as his work in “Tigerland,” “Requiem For A Dream” or “Josie and the Pussycats”: textures of interiors and exteriors, whether entirely practical or studded with CGI animation, are notable. His lighting of awomanuensis Pepper Potts (Gwyneth Paltrow) brings a golden, freckled glow to her pale features while Downey’s facial planes are as rumpled as his built biceps. Terrence Howard has a few knowing flashes, but his character is more functional than fleshed-out.

The movie’s attitude toward weaponry and warfare is incoherent, as should be expected from an investment of a post-$100 million scale that required military equipment to get ordnance gratis, but there are sneaky, snaky observations throughout, not the least of which is Downey’s unstemmable internal-external monologue of Stark’s thought processes. And the scene where the business-suited billionaire demonstrates his “Jericho” weaponry in the Afghani wilds, with explosions behind his outstretched arms, brandishes a worthy post-Robert Oppenheimer “I am Shiva, destroyer of worlds” undercurrent. Such moments elevate the slim, but never merely perfunctory, plotting.

Other bits: Cited several times just outside Stark’s workshop is a famous, Jasper Johns-style painting of a grid of broken squares of the U.S. flag—a state of mind and state of body for Stark as well as the nation who buys many of his weapons. (It’s doubtlessly meant to be the original, since we see Stark trying to buy a Jackson Pollock—“Gotta have it. Buy it. Store it.”)

Equally understated is the subtext of gala that Stark crashes at the Frank Gehry-designed Disney Concert Hall in downtown Los Angeles, a series of swoops, folds and crenellations of whorled and interleaved metal that could only be confected with computer design and constructed with the most contemporary of technology—like our hero’s necessary incarnation itself. A disused early model of the suit is on display like a samurai’s suit of centuries earlier would be fitted into a museum. Product placement is rife, and of the Financial Times is squirrelly, especially when Bridges asks to do its (nonexistent) crossword. The cameo by “Hugh Hefner” makes for an unexpectedly solid Marvel laugh as well. The last seconds of the movie proper are goofy-giddy; the post-credits sequence is stratospherically daffy.

“Iron Man” made more than $200 million last weekend. Isn’t that a marvel?