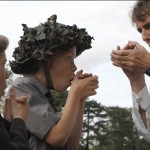 Garth Jennings’ “Son of Rambow” takes the same rude clay as Michel Gondry’s “Be Kind Rewind” with much more fruitful results. In the case of “Rambow,” two English 11-year-olds in the early 1980s get the idea of remaking “Rambo: First Blood” out the wilds of their imagination. The two boys are marvelous casting coups, from Will Proudfoot (Bill Milner), a member of a puritanical sect, whose first movie experience is a bootleg VHS of the Stallone-starrer he becomes obsessed with, and local bad-boy Lee Carter (Will Poulter), always identified by both names. Will Proudfoot! What a name, especially applied to Milner’s small pale bright eyes! This episodic, mildly sentimental tale has drawn comparisons to Wes Anderson and Jeunet-Caro, a more fruitful parallel to this joyful endeavor is “My Life as a Dog”: there’s genuine heart amid the prankish tomfoolery, and an overt homage to “Midnight Cowboy” is not misplaced. There’s Keatonesque comedy framing as well. The kids are beauties. It’s terrific when Jennings gets to them becoming “blood brothers” by a pond in a glade and in super-close shots of them we discover suddenly that the cheekbones of both are festooned with freckles. There are so many small, bright surprises it’d be a shame to give them away: this is one of those happy incidents I just like to point in the direction of and mouth the word, “Go!” (The early-1980s New Romantic music homages are giddy and knowing, to give away one bit of the fabric.) Jennings and longtime production partner Nick Goldsmith (who make videos under the Hammer & Tongs label and collaborated on “Hitchhiker’s Guide to The Galaxy”) are wonderfully aware of the goodness in naughty lads, prehensile geniuses in their splendid bloom. Plus footnotes to their own childhood experiences that glow in on-screen exaggeration. (Ray Pride)