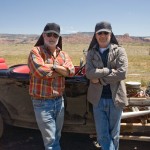 Goodwill may be the rarest commodity in movies today.

Not buzz from ill- or half-informed rumormongers, not good word-of-mouth after a film opens, when the text “S GOOD!!” rains from the skies. Simple goodwill. Journalists around the world fell upon themselves to repeat a New York Times article that repeated a downbeat report about “Indiana Jones and the Kingdom of the Crystal Skull” that had been posted to a spoiler site, written by someone in the industry who claimed to had attended a legally mandated exhibitor’s screening. In other words, a pseudonymous dis by someone who was violating a key tenet of his job had pissed on a product he would be distributing to the public. Or, as the case could be—no one but the Times reporter and his editors know for sure—it might be a repeat of ruckus from last summer involving a projectionist of twenty or so who saw nothing wrong with reviewing movies he was paid to show. (God and Homer did not invent “Doh!” for nothing.)

But “Indy”: all I’d heard for weeks from kids from 15 to 50 was a big, tall case of the warm-‘n’-fuzzies. The movie premiered at Cannes, and its North American press screenings were a few hours later, midday Sunday. Insta-reviews cascaded in. New York freelancer Eric Kohn text-messaged dribbles from Cannes, a stunt for which, a commenter at David Poland’s Hot Blog aptly suggested, “The guy should have been dragged out of the theatre and treated like a gambler caught cheating in old Vegas.” Who’s on first? Who fucking cares?

There are good things and indifferent things throughout this enterprise by the two richest directors who ever lived [pictured]—are they really worth several billion dollars each?—but most of the best (and worst) moments work from surprise, which reviews have already splashed across the media consciousness. If you want to be surprised, be warned that the rest of this piece has spoilers.

While a Lucasfilm production, “Indiana Jones and the Title by George Lucas” opens with a slap at DreamWorks’ partner, Paramount, whose mountain logo melts into what resembles a molehill, from which a prairie dog makes the first of many appearances. (The later swarms of flying monkeys bring far more cheer than the lame chimp in “Speed Racer.”) The original “Raiders of the Lost Ark” was supposed to be based on breakneck, nonsensical no-budget serials that Lucas supped upon as a youth, yet in the fourth iteration (with a fifth put forward by Spielberg at a Cannes press conference), the movie seems consumed by self-nostalgia, with wacky setpieces coming in an undifferentiated rush, an expensive crap rapture. (Lucas’ original title was reportedly “Indiana Jones and the Saucer Men from Mars,” and Harrison Ford actually speaks that line.)

An opening that establishes the 1957 setting has Lucas-style road racers drawing us into a military zone (quietly marked “Hangar 51”) and a confrontation with Russian spies, led by Cate Blanchett as the most boldly sexual drawing of Natasha Fatale ever (although Boris Badonov’s consort did not have those astonishing blue eyes). Holding her features in repose, Spielberg elevates her above the “Ilsa: She-Wolf Of The SKG” Blanchett resembled in promotional stills.

The dialogue throughout is painfully expository and mostly lame in a self-aware, declarative fashion, a geezer chic to match leading man Harrison Ford’s 65 years. The stunt men are obvious and his asides are murmured, almost whispered, almost as he didn’t care to be bothered once the fedora was popped on his head. French filmmakers like Truffaut and Godard always made the point of Alfred Hitchcock that his movies were as much about images as about editing and the psychology of point-of-view—not framing or geometry or composition, the basic elements of mise-en-scene, but a bit of action weighted with emotional or cultural undertow. (A man in a business suit chased by a crop-duster across a vast empty field in broad daylight; an extreme close-up of a key; a dying woman’s eye superimposed on the drain where her blood corkscrews away.)

The lack of iconic images was one of the letdowns of “Crystal Skull,” which doesn’t resonate as a Macguffin, either. The action in the last third, filled with CGI, is often as incoherent as a “Mummy” sequel. The most piercing sequence comes early, when Jones blunders into a nuclear test. A perfect, depopulated 1950s suburban tract is peopled by mannequins. The lightly satiric décor takes on a comic yet fearful air in the framing of the figures, like George Segal sculptures, and then in their fiery detonation worthy of the great maker of sardonic sculptural tableaux, Ed Kienholz. Spielberg caps the passage with a low shot from behind Jones, where the “hero” angle from beneath is not granted to our dwarfed protagonist, but by the horror-blooming, dark, rude, dust-filled mushroom, the annihilating terror of the twentieth century dwarfing the man with the hat and the whip.

“Indiana Jones And The Kingdom of the Crystal Skull” is now playing.