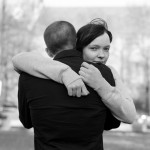 Sunny Saturday afternoon and a surprising sixty or so people were at Landmark Century, including a friend only a few years older than the 23-year-olds who comprise the characters of “Reprise,” and whose life is also wrapped up in music and letters and the world that is girls. Only afterward did I discover The Reader hadn’t reviewed the movie at all (in a week where its film feature advocating the stealing of an independent filmmaker’s work, which I haven’t seen written about any commercial releases from companies that advertise in their film section). I didn’t want to read Ebert’s review after seeing it’s a two-star notice; it might be as wrong-headed as his writing about Kiarostami (one star for “Taste of Cherry”), or it could be utterly convincing; I’ll stick with my pleasure in “Reprise” for now.

But I was gratified by the audience and with my friend’s reaction afterward: this Norwegian movie from 2006 is more here-and-now than any movie I might be able to see this week. (“Sex and the City,” previewed after press time, would be an instance.) “Reprise,” I wrote last week, is such a vivid, bravura, gorgeous, funny, sad, beautiful, smart (but never smug) display of cinematic fireworks, that it’s a terrible sign of the state of American film-going that it almost never saw U.S. screens. Trier and I spoke on the phone recently about some of the film’s many virtues, including a willingness to hark back to movies like Alain Resnais’ masterpiece, “Last Year at Marienbad,” which recently played the Music Box. This movie is such a bundle of energy, a burst of exuberance, I tell Trier admiringly. “Thanks! Yeah, we’ve kind of looked at it as a bit of a scrapbook film,” the 34-year-old writer-director says. “We didn’t want to restrict ourselves too much, we wanted there to be chaos and digressions and allowed ourselves to do this because of the age of the characters and their types.”

“Reprise” is thinking and digressing and contradicting itself at every turn: it’s a consciousness built on all its characters’ subconscious, like a good novel. “That’s something that both me and my co-writer [Eskil Vogt] are very interested in exploring. This idea, which is a ridiculous idea, that you can’t show thought in cinema! I think it’s rather weird. Certainly there are ways of trying to show associative, or associations of thought patterns in film. It’s something that we just find fun to explore. With ‘Reprise,’ I think we’ve gone the furthest in a way, trying to show that what we imagine, or what we wish for, or what we wish we should have said, or that thing that keeps nagging us from the past, all of that is part of several of the movements we are in. We were trying to play around with that.”

There’s a sequence that’s emblematic for me, when the writer who’s published first is walking down the street with a woman and the voiceover observes she was the only person he ever knew who had The Ramones on vinyl and then he gets hit by a car. Three different layers of cognition going on there, and one of them is, I’m not paying attention, I’m listening to her and looking at her and thinking about her vinyl, so I’m going to walk out in traffic. “Yeah, yeah, true,” Trier agrees. “There are several layers. We like to have sort of a [multiple] perspective on things without being too pretentious about it. I guess a lot of this was trying to use devices—I hate ‘device,’ because it sounds like a mock-contrived approach to storytelling, and hopefully our voiceover is quite integral to what’s going on—but we certainly wanted to have a multilayered, a multifaceted approach to this, in terms of having a narrating third person, almost authorial voice going on. And also at the same time using off-voice, which is closer to thought in a way, almost as if people are thinking back at other moments while they are talking to each other. For instance, [the couple] in the café, they speak about the past, they walk in the park, suddenly we understand the park is in the present as well, we’re not quite sure what was said, but hopefully we get a sense of their reality.”

Trier admires Resnais, but he says, too, that “Andrei Tarkovsky is a big inspiration. The way that he describes in his book, ‘Sculpting in Time,’ his approach to reality is as if you… if you walk down a street and see a man, and you try to re-create that, thinking of reality as an objective truth and put the camera where your eyes [were], you film a man, an actor that looks like the man, you will capture nothing. Because what you have seen is your own thought process. You have seen that the man might have resembled your uncle or an old friend; you might have had a fight with your girlfriend that made you sad as you looked at him. I mean, there are millions of other moments present in that moment. To try to make those connections and contextualizing things is just as important as what is actually seen.”

[…] artistic family. Trier is one of our most literary filmmakers, in the sense that in movies like “Reprise” and “Oslo, August 31st” he fuses the lyricism of cinema with the flow and structure of the […]