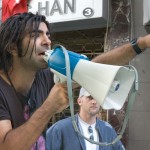 Turkish-German writer-director Fatih Akin has been growing as a filmmaker since his debut, 1998’s “A Short, Sharp Shock,” a vivid but Scorsese-drenched buddy film, and is best known for “Head-On” (2004), the story of a devastating, sexually impassioned, destructive romance between a young Turkish woman and an older Turkish-German man.

Even in his giddy comedy “In July” (2000) and his mosaic documentary on contemporary Turkish music, “Crossing the Bridge” (2005), Akin’s figures are defined by and intertwined with borders and boundaries. His latest, “Edge of Heaven,” is a fierce, generous melodrama, the second of a trilogy about émigré culture patterned after Fassbinder’s trilogy of movies about post-World War II German history that began with “The Marriage of Maria Braun.” Dovetailing storylines begin with a retired widower meeting Yeter (Nursel Kose), a prostitute whom he offers to pay to live with him. His son Nejat (Baki Davrak), a college professor, disapproves, but grows close to Yeter until her accidental death, which leads him to Istanbul in search of her missing daughter, Ayten (Nurgul Yesilçay). Nejat takes over a German bookstore as its owner returns to Germany, and is unaware that Ayten, a political activist, is in fact in Germany where she meets a university student (Patrycia Ziolkowska) who admires her politics and brings her to bed in the house of her mother (Schygulla). Unexpected intersections lead to highly emotional, deeply tragic, but ultimately hopeful consequences, between cultures and between generations. “Edge of Heaven” is patterned around recurring structures and themes and Akin’s superbly expressive filmmaking—framing and cutting and a generous eye for the features of city streets and pensive faces—demonstrates bold use of craft.

His experiences in Istanbul talking to musicians while making “Crossing the Bridge” were an inspiration for the film. Istanbul, historically, was a great cosmopolitan crossroads. “You still feel the sort of facts of that beautiful past but it’s not a multicultural presence anymore,” Akin tells me in slightly imperfect yet expressive English. “It has this multicultural past, and you see this past through the buildings, and through the architecture and you hear it in the music and some faces, physically, but now it has this, I dunno, this present where this multicultural past has disappeared. The more time spans, the more it disappears. That’s a pity, that’s a shame. I don’t want to come to the town and have this multicultural nostalgia; I want to have it presently. I have this in Germany these days, more.”

The film did reasonably well in Turkey. “It made box-office, which means people liked the film. The reviews were kind of mixed. They weren’t enthusiastic like in Europe or for ‘Head On.’ I expected that because the film is not taking any party, the film is kind of neutral. I made the film that I hoped no political extreme can instrumentalize the film for itself. It’s a cold portrayal of the left movement and a cold portrayal of the right movement.”

Akin strives for a larger complexity with the overlapping issues about identity and borders and desire. (Turkey’s hope for accession to the European Union bubbles under and bursts through the story’s fabric.) “Since I am also a documentary filmmaker I recognize the idea of observing,” Akin says. “To not push or force my audience to think in a certain direction. When I see films where the film is really trying to teach me something in a didactic way, trying to force me to think in a certain direction, I don’t feel so comfortable. I think I’ve read enough books and I had a good education, y’know?

“When I made this film, [as in] every film I do, I am the first audience, you know? I don’t want to have propaganda. It’s a non-political film. My definition of a political film is when you force an audience to accept certain [things]. What you describe is the same in Turkey. If I get criticism in Turkey, it’s, ‘Why don’t I take a clear position?’ For this film, the issues are too complex. I want to show that in a way, everything has two sides. It’s a very philosophic[al] film, and it means that [it needs] the interactivity of the audience.”

Akin’s work shows an affinity for American movies. “I get a lot of inspiration through the cinema, the New Hollywood Cinema, the cinema of the late Sixties ’til the end of the Seventies. I think that period was the best American cinema. And you have heritages of that today in American movies like ‘Syriana’ and ”Good Night and Good Luck.’ These were political films, in a way, they deal with political issues, but especially ‘Syriana,’ I like the observing of things and not commenting. The filmmaker gives the audience a kind of space to think. This is what I wish of cinema. I don’t like films that answer every question. With apolitical statement—I don’t know if you know the cinema of Yilmaz Guney, a very popular Turkish director? After a while, he was forcing the audience to be left, and you don’t feel very comfortable to watch. First a film has to entertain. First rank, a film must be storytelling. Whatever your message is, whatever your ideas are, whatever your thoughts as an artist are, you can smuggle them or put them into the film so that the audience can understand them on their own.”

“Edge of Heaven” opens Friday at the Music Box.