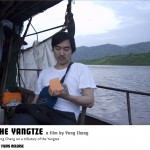 What lies beneath “Up The Yangtze” is a true depth charge. A longitudinal documentary of surface calm, it’s a smashing debut for young Canadian-Chinese director Yang Chung whose three years in making the film included a year of befriending teenagers above and below decks on a cruise ship trawling the immense waterway known in China as simply “The River” while on trips called “Farewell Cruises.” As the waters rise behind the Three Gorges dam, history’s largest hydroelectric venture, thousands of years of small-town culture has been submerged. The “farewells” are to submerged or soon-to-be-submerged cities and towns. (See Jia Zhang-Ke’s still life for a formidably stylized take on the same subject.) Yang’s first stroke was to approach Victoria Cruises, a Queens-based company run by a Taiwanese-American family. They said yes and as the project wore on, they remained patient and without suspicions. I heard Chung hold forth several times on the subject at panels at the Thessaloniki Documentary Festival, but didn’t record any of it: suffice it to say, he was pleasantly surprised at the access he got. But the result is worthy of its comparison to Altman in a nonfiction format: the months of conversation and contemplation have been fluently edited into a compassionate, never didactic narrative of great heart. In swirling waters and workaday sorrows, there are always currents of metaphor and analogy racing through the viewer’s brain. Wang Shi Qing’s camerawork is a marvel as well. There is a haunting shot of a small dancing girl that Chung captured on his cell phone; it’s emblematic of his eye and his focus. 95m. (Ray Pride)