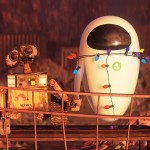 A plush cousin to “Idiocracy,” the latest humbling eyeful from Pixar, “Wall-E,” says that Americans are going to die for their consumption habits, except for a few fat fumblers shot out into space.

While less profane, “Wall-E,” directed by Andrew Stanton (“Finding Nemo”), is more pessimistic than Mike Judge’s dark mess. Its protagonist is the titular rusty robot that no one bothered to turn off 700 years earlier when the survivors of a ruined Earth leave for a luxury cruise ship, the Axiom, deep in outer space. The tableaux of a ruined Manhattan are thrilling, drawing from myriad influences: “Blade Runner” tempered with ideas from artists like Jodorowsky, Mobius and Jacques Tardi, among other hands from the Metal Hurlant era of comics. Wall-E becomes a Sisyphus building and ascending ziggurats of consumer waste that would appeal to Philip K. Dick in this post-human Metropolis, spending each day compacting and constructing step-at-a-time towers of Babel, with the watercolor look of Bruce McCall’s inventive apocrypha atop a Breughel canvas without human figures.

For the first forty minutes or so, there’s no dialogue and the eye wanders through an inventive tapestry of the remnants of a lost civilization. Stanton et al. make the most of silence (along with Ben Burtt’s terrific sound design). No brand names are given pride of placement, only the “Buy N Large” megacorp that seems to have absorbed all before the fall, including the government. Fred Willard makes a cameo as Shelby Forthright, the cheerleader CEO, using the memorable phrase, “Stay the course.”

Wall-E’s daily routine includes collecting things he likes: he’s a dogged packrat assembling a curiosity cabinet of technology and junk. He owns a single videotape (of “Hello Dolly”!), on BetaMax, which he watches through a contraption that includes an early iPod. It’s reminiscent of Los Angeles’ Museum of Jurassic Technology, as if civilization were a long-gone myth, an invented legend collated by a robot from scraps. When Wall-E’s solar panels are filled each morning, it’s signaled by the Mac start-up chime, which in one of its iterations, while rushing through the rings of Saturn, is strangely touching. (What’s he running? Mac OS MMDCCLXXV?)

Where “Cars” erred on the side of trying to make 1950s-style internal combustion engines into a thing of shiny love to dazzle the most prehensile of animation watchers, “Wall-E’”s anthropo-dwarfism goes the opposite direction, toward an eco-fable that’s more than majestic in its detailing while keeping its characters exceedingly small. (Wall-E’s sidekick is a resilient cockroach.) Stanton has said words to the effect that most of the Pixar projects to date were sketched out on a napkin over lunch more than fifteen years ago, and while the napkin has grown many terabytes larger, the idea of “the last robot” remains.

And there’s a lot of “last” to go around. After meeting a sleek female robot, EVA, that’s been dispatched to find vestiges of vegetation in the barren, windblown topsoil, further destruction ensues, including the nuking of a rank of tankers that at once is apocalypse and invokes the image of ship-cutters in India and other countries who take disused ships apart piece by piece. EVA’s intense minimalism suggests a universal remote that Apple design guru Jonathan Ive—listed in the end credits—might well have had a hand in. Cinematographer Roger Deakins (“No Country For Old Men”) was a consultant, too, and the textures of ruined Earth, including a scene between Wall-E and EVA at brick-red sunset seen from a bench on the Brooklyn Heights promenade, looking across an empty river bed to the dead lands of the island of schist and shite that Manhattan became, are haunting in their densely detailed grimness.

When EVA finds a plant that Wall-E had stowed in a Chaplin-style boot, a race to space follows. (A skyful of fallow space trash against a clean, bright star field joshes the opening of “Star Wars.”) The style shifts radically when the pair arrive on Axiom, with its thousands of blubberous passengers, grown lazy from generation upon generation of pampering in the 700 years onboard. They’re like inflatable Incredibles, ponging around on levitating air chairs. (Another keen homage: as the robots emerge into the corridors of Axiom, they’re hit with a crush of people just as the characters in Lucas’ “THX-1138” are just outside the expanse of white infinity they believe they had been trapped in.)

Just past forty years since the debut of “2001” and HAL, “Wall-E’”s pastiche of Kubrick’s notions of space stations and cold computers has a few tickles, including Sigourney Weaver’s voicing of the onboard brain. Jeff Garlin’s voice work as the stupefied captain of the ship amuses, too. But nothing trumps a finely detailed apocalypse. And how do you get a happy ending from the end of the world? It is possible, and when you do, you have Peter Gabriel sing atop it, backed by the Soweto Gospel Choir.