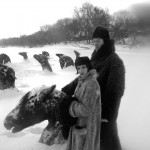 Winnipeg! Home of ice, snow and Guy Maddin! Winnipeg! Sleepwalking capitol of the world, where you’re allowed to keep the keys to past apartments and current tenants are obligated to keep you safe until you wake if you sleepwalk in at all hours of the night! Winnipeg! Where gay bison demolished Happyland amusement park! Winnipeg! Maddin’s latest, perhaps his masterpiece! A surrealistic fictional documentary of the loins and environs from which he sprung! Rhythmic! Cyclical! Murmurously mad! Slyly sussurant! “My Winnipeg” in no way surpasses Maddin’s short, “The Heart of the World” (2000), an anthology of all his stylistic twitches, but as ostensible perambulation down the tracks of his tearaways from childhood onward on the Manitoba prairie, Maddin’s latest, and maybe best, is an elusive tone poem compacted from all his idées fixe. Mom, played by the elderly Ann Savage, perhaps the ultimate femme fatale in Edgar G. Ulmer’s 1945 “Detour,” plays perhaps the ultimate controlling mother as Maddin sets up house in the home where he grew up to attempt to recollect his childhood. Any man who can confound the fork of the Red River and the Assiniboine in central Winnipeg with his mother’s lap, his mother’s pubis, knows no public shame. As dream state doodling through private and civic self-mytholgoy goes, this is precious surrealism, including visits to the courting yard on a frozen river studded with the heads of stampeding horses who froze there escaping a fire. Comic and post-quaint, “My Winnipeg” is deep delight. Maddin narrates. 80m. (Ray Pride)

“My Winnipeg” opens Friday at the Music Box, which is also in a sleepwalking district.