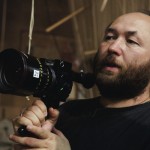 Only Timur Bekmambetov could have made “Wanted.” And that’s a grand thing.

Opening with the familiar Universal logo that has sparkling space dust girdling the globe, we’re quickly thrown into a comic-book adaptation written by Scots by a Kazakh director who made his name in Russia, set in a lustrously shot Chicago, with a Scottish male lead and an American female. We’re quickly propelled into a loonily labyrinthine, gratifyingly Byzantine weave of immaculately produced visual filmmaking. “Wanted” is not breathless in the sense of Michael Bay’s accelerated cutting (although the cinematographer, Mitchell Amundsen, shot “Transformers” and knows from gleam).

Bekmambetov’s “Nightwatch” (2004) and “Daywatch” (2006) were reportedly Russia’s biggest hits ever, but didn’t cross over here. Of “Daywatch,” I noted that his “full-tilt willingness to be incomprehensible is his keenest talent,” and of “Nightwatch,” its “convoluted, grimy, gruesome, Gothic, Slavic, giddy humbug.” Ah, but now. “Wanted” is a tonally aggressive, wildly expressionistic, deeply satisfying film, a sleekly machined action powerhouse, words I hardly expected to type this summer.

Wesley Gibson (James McEvoy, sporting a fine American accent) is a lowly office worker who takes anti-anxiety medication and knows that his beautiful-but-shrill girlfriend is having sex with one of his coworkers on their Ikea kitchen table. A voice-over by this cubicle-bound sweet-faced nerd is profane and echoes with hapless exasperation the self-realization gab of “Fight Club.” (A character named Darden may just echo “Tyler Durden.”) But that’s only a component of the many layers offered up by Bekmambetov and screenwriters Michael Brandt, Derek Haas and Chris Morgan (from the comic-book series by Mark Millar and J. G. Jones). Bekmambetov, like George Lucas, James Cameron and Peter Jackson before him, owns his own effects house, and there are generous swirls and dabs of technique throughout this story of a young man who’s enlisted by a secret society of assassins who’ve persisted for a thousand years, led by Morgan Freeman, and whose mostly silent teacher of the arts hardcore is embodied by Angelina Jolie. (She has fun.)

Bekmambetov’s going for baroque at each available instant. Yet on recognizable streets in the Loop and near North, atop El trains always curving or going under low underpasses, he elevates and heightens the city in rare fashion, much like Michael Mann or Andy Davis (“The Fugitive,” “Code of Silence”). Lake and Wabash; Wacker and Wabash; lower Wacker: all stylishly rendered. The multiple uses of and references to the El are integral to the tale, not visual or sonic scene-setting. (An opening shootout that takes place partly atop the Carbide and Carbon Building, home of the Hard Rock Hotel, is immaculately cut and composed for maximum narrative and visceral effect.)

These filmmakers get Chicago. Bekmambetov uses everything at his disposal, adapting more than lifting styles, techniques and gags that have been in movies by David Fincher and the Wachowskis, for instance. But this florid, perfervid visual style delivers. No romcom-style reverse-angle tick-tocks of conversation. Yet the rush of imagery doesn’t suggest videogames as much as a romping pulp infraction.

Credit, too, must go to Chicago names in the credits likely to have something to do with the look, such as location manager Mark Mamalakis, as well as prop work that includes the characteristic Loop newspaper kiosks with headlines about a violent act, all done in the correct style of the newspapers on display. A character back at tough-love assassin HQ drinks from a Bears glass. A restorative bath involving some kind of chemical-wax compound comes to resemble shards of broken ice eddying around Wesley’s face (Alexander Nevsky much, Timur?) The costume design, Varvara Avdyushko, is also typical of the attention to detail: everyone’s garb is slightly heightened; Wesley’s costumes are plain and tend to beige and brown, yet are immaculately refined.

Even the stripped-down, quintessential cod-philosophical twaddle satisfies. “Why are you here?” “I don’t know who I am!” “That’s good enough for now.” And when you can pull off Morgan Freeman intoning, “We call this the loom of fate,” causing you to grin rather than laugh out loud, something’s very right. You come to accept characters slinging armory like a chef with an omelet pan or a tennis player at the top of their game. The El itself becomes one more weapon in their expressive arsenal.

With such impressive filmmaking in every technical respect, and decent respect for the comic-book flummery while acknowledging its essential silliness, you want something to tie it together, a deeper undercurrent other than the obligatory Zennish bromides. Perhaps an undercurrent about terrorist cells? Mmm… No. [AN ALLUSION TO THE ENDING FOLLOWS.] The man who made his name in Russia pulls it off with gleeful aplomb. In the last scene, which is one of a corkscrew-laden movie’s most elaborate twist-and-turn sequences, when the last one standing shows how it’s done and confronts the audience head-on with a profane provocation? It’s the grace note: the winner who takes all, head spinning throughout from Kremlin-style hall of mirrors reversals, now resembles one triumphant figure on the world stage: Vladimir Putin. Za vas, Timur! Za vas! “Wanted” opens Friday.