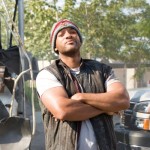 Anticipation runs high for further blackening of Batman’s soul in “The Dark Knight,” but the Fourth of July weekend belongs to “Hancock,” a handsomely haywire comic-tragic concoction that flies high, sideways, off course and straight up in the air.

Essentially a shaggy-God story, the riotously primal “Hancock” makes for a swell thrill ride with its terse take on a comically disheveled superhero. “Wanted” is a splendid bauble of heartless Eastern cruelty, but what’s on show in “Hancock” is something shockingly heartfelt, with a level of investment and inflection that teems with glorious incaution.

Among the levels that jostle is a satire of shallow self-realization philosophizing, with the idea of destiny versus choice considered as if O magazine were a trade journal dispatched from atop Olympus. Stewart Brand, who spearheaded the Whole Earth Catalog, the Internet avant le lettre in a bound foolscap tablet, liked to say, “We are as gods and might as well get good at it.” That’s what the hung-over Hancock (Will Smith) wakes to each day: expectations and responsibilities he cannot remember the source of. Squinty-eyed under a scraggly cap on a bus bench, reaching for his quart of Gentleman Jim’s Bourbon.

And he makes a mess of Los Angeles: he’s the superhero who couldn’t land straight. Liabilities and warrants ensue. “Hancock” opens with a cross-cut action scene that’s in media res embodied: what’s the need for an origin myth in your opening scene if you can show all the contradictions of the character in mid-air? Later, Hancock saves the life of Ray Embrey, an idealistic public relations guy, played by the ineffable Jason Bateman. (We’ve just seen his good works shot down in a Big Pharma boardroom peopled by co-producers Akiva Goldsman and Michael Mann as jaded corporados; a Biograph theater reference later on, alluding to Mann’s forthcoming “Public Enemies” is one of many throwaway details in the vivid frames.) Hancock gets Ray home after the literal trainwreck of his life, and Ray’s convinced that he can turn his skills toward making people understand Hancock can be a good guy. He’s not to be taken for granted, sneered at. Over dinner, Hancock meets Ray’s son, and his wife, Mary, the “angel” who changed his life at its lowest point.

The easy equipoise of Bateman’s on-screen characters, if you put aside the wonderful speed-freak run-a-rant he had in “Smokin’ Aces,” run to the looks of slight and hunt when certain things sour in this story: indicated but not underlined, bolded, capped. A picture is a flicker in itself. There’s a duplicitous charge in a number of scenes where characters withhold knowledge, don’t correct misperceptions, don’t disclose. (You’ll know what I mean when you see it; I don’t even want to hint.)

Berg, emerging as one of the most ambitious and jumpy directors who dares hopscotch across genres (“Very Bad Things,” “The Rundown,” “Friday Night Lights,” The Kingdom,” TV’s 2000 “Wonderland”), racks the same notions visually: a dance of eyelines of matched looks that suggest one thing, are in fact are another and eventually return to the first impression, are electric. (Tobias Schliessler’s cinematography, meshed with John Dykstra’s special effects, lay on grain or gloss depending on the needs of the scene; tonal insolence that’s not heedless is always fine to witness.)

Even at his most jocular, Berg understands the elemental mythos that these sorts of stories are supposed to be good for. “Hancock” bursts at the seams with the silly and the serious, the inspired and the grandiloquent, but in ways that ought not be even hinted at, but discovered, managing to honor the essential iconic elements that comics of long-standing strive to capture in their big-screen adaptations. And amid the baroque jokes and stunts, Berg still knows how to wreak line readings from the smallest of lines, such as “I’m telling!” and “You didn’t!”—the summer’s two most delicious terse-words to date. They’re out of nowhere and say everything.

With a style more febrile and antsy than the Mannerisms of his mentor and co-producer Michael Mann, Berg is generous and dexterous and “Hancock” goes places you wouldn’t expect, including singular romcom-plications of epic complexity. In the end, intelligent action-film tweakery produces results with the brutality and clarity of Greek myth. Destiny? Choice. Can Hancock find peace? Walk among men with his head held high? That would be a happy ending. “Hancock” is now playing.