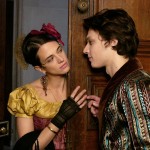 A sulfurous, sexual period piece, Catherine Breillat’s “The Last Mistress” (Une vieille maîtresse) is, at first glance, both her most accessible and most carnal movie. An explicit, tempestuous variation on common costume drama, this adaptation of a nineteenth–century novel plays out as a luscious melodramatic essay. A ten-year obsession for Breillat becomes an enveloping melodramatic essay on yearning. Unfolding during the reign of “citizen king” Louis Phillppe, the story details the marriage of aristocrat Ryno de Marigny (an angelic Fu-ad Aît Aattou) to Hermangarde (Roxane Mesquida, from “Fat Girl”), a virginal young woman of the same class. Yet Ryno is still in thrall to his older lover of a decade, the flamenca La Vellini (Asia Argento). The temperature is substantially more humid than in “Dangerous Liaisons” or its variants like “Cruel Intentions.” Argento’s feral presence is a lively embodiment of one of Breillat’s fixations: how women struggle against the place they are offered in society, as well as battle for the status they desire, with diversions into jealousy, lust, hate, passion. Her increasingly familiar force of perverse nature is well suited to Breillat’s idées fixe about the weft and warpage of obsession, creating an atmosphere that despite the setting and the eye-filling plumage proceeds with contemporary force. The result is daring, delirious and ultimately affecting: the psychosexual battleground is eternal. People had sex then, and have sex now, and talk about it, dressed and dishabille.

“The story could only take place in an aristocratic environment,” Breillat wrote in a director’s note in a Rohmeresque vein. “When struggling to survive, feeding a family and finding a room for shelter, there is no time for the leisure of romance. Not enough time to experience the pureness. Sentiment can only be expressed in a certain level of comfort where it is not tainted by the harsh realities of life. The way many great authors of that era expressed strong feeling in such idealistic settings has always fascinated me. Aristocracy simply lends itself to the refinery of sentiments.”

Several years ago, while preparing “The Last Mistress,” her twelfth feature, Breillat, at 55, suffered a massive cerebral hemorrhage. She’s doing better four years later, preparing a new movie starring Naomi Campbell. We get rid of the notion of the “period piece” straightaway. “As you know, Shakespeare is modern, the classical dramas, and Racine and Corneille and all these antiques, they all deal with contemporary issues, they’re all extremely contemporary,” she explains methodically. “There’s no such thing, really, as a costume drama, nothing is ever a costume drama. Or, rather, everything is a costume drama. If we watch a film from the 1950s, we can have the feeling that in terms of emotions, at least, it’s utterly contemporary. The sentiments are contemporary. There’s no question. I’ve always tried to make films [that are] are timeless.”

Like the Coen brothers with their “near-period pieces,” where “today” can’t accidentally slip in. “I agree with them completely. I’ve always said that things that are fashionable will go out of fashion quickly. And I deal with things that are timeless. Emotions, elements that date back to years ago, already have a classical character. Look at the example, the film noir American. In ‘The Last Mistress,’ the characters’ costumes are such where the sort you would have seen in the 1940s and 1950s, those dresses would not have been out of place in a detective film. But in terms of vamps, the model that inspired me most specifically was Marlene Dietrich.”

An inauthentic figure who’s utterly timeless, completely constructed yet a figure outside of time. “Utterly modern! You’re absolutely right about Marlene Dietrich being completely timeless. Here I was making a film in flamenco fashion inspired by a Spanish woman, and to me the most beautiful Spanish woman you’ll ever see on screen is Marlene Dietrich in ‘The Devil is a Woman.’ There she is, a platinum blonde German, and she’s just fantastic. But it just goes to show that fantasy remains fantasy, that a phantasm is powerful, and in the film, she is a projection of your fantasy.”

“I’m not going to say I’m despotic on set, but I would say people enter a state of hypnosis,” Breillat tells me a little later. “I possess them as a director. I possess them body and soul in such a way that they apply their talents, they devote their talents for the good of the film. I’m an artisan, I observe everything on the film, setting the framing, citing the set design, choosing the actors, of course, and the costumes. In the same way, I appropriate the actors. In fact, the actors aren’t actors. They haven’t been actors before my films. It’s I who make them into actors. I see myself like a painter, who mixes, who crushes their own paints, rather than buying paints that are already in a tube. To me a professional actor is a tube that’s already been used. [My cinematographer] Yorgos Arvanitis is my paintbrush and the canvas is my film.”