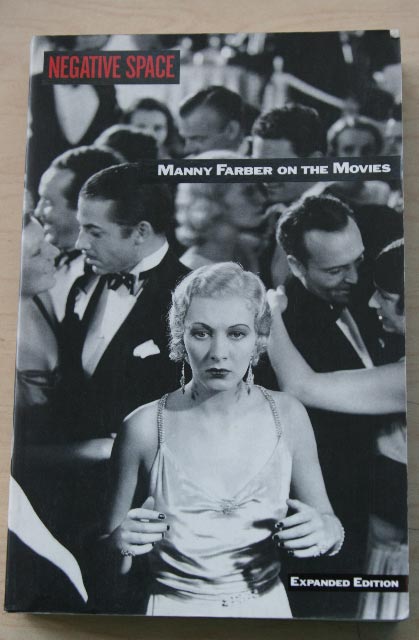 Sunday night, after thirty-three years, the movie review show that first featured Chicago newspapermen Roger Ebert and Gene Siskel swatting at each other while offering spirited opinions, breathed its last. The only survivors are distant cousins of short attention span.

One of the reasons Ebert is an essential voice in American film criticism is because of his instincts as a trained newspaperman, the fine and largely misunderstood ability to provide cogent, thoughtful, lucid dispatches on deadline. (His enthusiastic output in recent months promises more of this, if fewer thumbs.) An important influence and stylist despite slim output, Manny Farber, was also stilled Sunday night. Farber, a painter and bold cultural critic, credited with coining the term “underground cinema,” was 91.

His only collection of essays, “Negative Space,” was published in 1971 (reprinted in paperback in 1998). His collage of language is as restive and fidgety as the work of an artist like Rauschenberg: unexpected clashes of unpredictable beauty. His language is exact and striking: crunch and bite with a rasp like bones rubbed together. Farber, who first and foremost considered himself a painter, drew equally from high art and pop forms like boxing and jazz and comic strips, with a style that was eclectic, wide-eyed, gruff, grounded, hardly flighty, seldom grandiloquent, certainly not badinage, not at all jeremiad. But still there’s certainty in the music of his sentences. Farber’s prose has a ruthlessness and precision that bespeaks hours bare-fist punching at the Royal portable and then slashing slivers with scissors and basting with paste an ever-more accomplished cut-up. He conceded that his effects are like the layering and smearing and reworking of layers of paint, that he is “unable to write anything at all without extraordinary amounts of rewriting.”

He offered dignity to what were then unappreciated subjects like the films of Howard Hawks and Sam Fuller. Even his dismissals sing: “The absurdity of ‘La Notte’ and ‘L’Avventura’ is that its director is an authentically interesting oddball who doesn’t recognize the fact. His talent is for small eccentric microscope studies, like Paul Klee’s, of people and things pinned in their grotesquerie to an oppressive social backdrop. Unlike Klee, who stayed small and thus almost evaded affectation, Antonioni’s aspiration is to pin the viewer to the wall and slug him with wet towels of artiness and significance.”

Farber also set up a dialectic that’s sometimes misused, positing “white elephant” art against “termite art.” Of Kurosawa’s “Ikiru,” Farber asserted that magnificent movie “sums up much of what a termite art aims at: buglike immersion in a small area without point or aim, and, over all, concentration on nailing down one moment without glamorizing it, but forgetting this accomplishment as soon as it has been passed; the feeling that all is expendable, that it can be chopped up and flung down in a different arrangement without ruin.”

As a writer, and as a painter whose most recent show closed in June of this year, Farber didn’t like movies of “funguslike creativity and narcissistic style” like “Lawrence of Arabia.” Of such enterprise, he wrote, “The common denominator of these laborious ploys is, actually, the need of the director and writer to overfamiliarize the audience with the picture it’s watching: to blow up every situation and character like an affable inner tube with recognizable details and smarmy compassion.”

He understood textures and motion and mood like few others. I was lucky enough to discover his work as soon as I started college. Before the redevelopment of River North just above the river, streets like Clark were lined with junk and treasure. Stories-high used bookstores, merchants of grime that peddled pearls of pulp on the side, were manned by old men who huddled around wood-burning stoves in winter, hands raised as if to worship the flue that surrounded the paper that surrounded them. The clerks, hunched and pale, monks from an uncommonly impoverished order who for all I knew could have been in their 40s, seemed like aliens subsisting on dirt, soot and flakes of fonts in unkempt beards.

The flammable stood in piles, on shelves of almost audible sag, in boxes of cryptic arrangement. A kid, I marveled at these high-allergen barns of pop past. A flutter could be seismic, setting off a slip-sliding reaction or a savage shout from the newsprint-keepers. If you wanted runs of defunct magazines from the nineteenth century, easy. Enthusiast magazines about telegraphy? Yes. Specific back numbers of magazines Farber wrote for, from Time to the New Republic, Artforum and girlie titles like Cavalier? Their patience was strained.

There was a century of sundry knowledge inside these huge hugs of filth. In these dens of dust and words, I fished numbers of Sight & Sound and Film Comment and Film Quarterly from nests of long-defunct periodicals. One of my most treasured finds in these sties was a first edition of Sam Fuller’s first novel, which he told me he’d never seen in hardcover, before dashing off a “THIS PROVES YOU WERE BORN TO UP-DIG” in vivaciously squirrelly old-man scrawl.

The first editions of “Negative Space” I also found sit in front of me on my desk. From college days there was a further grail: uncollected Farber. I found a couple with great effort. But those archeological troves are demolished, dust to dust. Those years have passed, lives lived. There may be leaves of Farber’s uncollected work fluttering out there somewhere, but “Negative Space” remains rock-solid. Pungent (if not necessarily pugilistic) words about movies last. A visual critic with magnificent taste and wild insights who does not fail words: picture that.