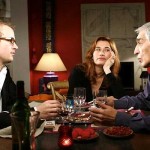 January and August of most years are the dodgiest months of all as studio-film releases go, when long-delayed, long-tampered-with and long-painful dogs are let out of their cages. The big studios (and Lionsgate) have in the past year or so done the service to the working reviewer of failing to preview these lost puppies for reviewers. (Although there is a Texas-based reviewer for Variety who notes he’s assigned each Christmas morning to see the most violent release of the season that seeps up under the seasonal tree or bush.) 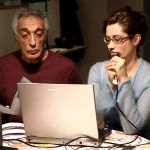 Folks who see a lot of movies professionally may be even more sensitive than the average movie-lover. Where the guy down the street can say of an enterprise like “The Rocker,” “Nuh-uh. The idea of Rainn Wilson as an aging musical wanna-be who seems to be sporting a diaper turns my stomach. Want to get pizza?” and no one’s the poorer. Steve Coogan playing a one-note, stuck-in-one-gear Steve Coogan-ish asshole in “Tropic Thunder” or “Hamlet 2”? How about sushi? Several writers in the 1980s made the suggestion that Steve Guttenberg was a star because he was an only-slightly-handsomer version of mid-level casting executives. More recently, the rapid-fire output of Judd Apatow-produced comedies about slightly shrubby losers getting the girl have led to similar musings about wish-fulfillment. (Although I’d say the confidence the somewhat slimmed-down Seth Rogen shows in “Pineapple Express” is a nice boost up from, say, Jonah Hill’s apoplectically red-faced spleen and panic in “Superbad.”)

Among this week’s movies that were available for preview is Idit Cebula’s larky French comedy, “Two Lives Plus One,” the story of a Parisian wife pushed and pulled on all sides by her controlling family and whose life changes when she buys a laptop and starts keeping—and publishing—journals. She’s played by Emmanuelle Devos, an actress whose charm goes beyond beauty and sensuality: she’s simply someone you cannot but stare at. She’s the same way in movies like Arnaud Desplechin’s “Kings and Queen”: wide almond eyes with a steady gaze, a slight overbite, assured, reserved—you remember that movies were once more than the sum of spare parts from the house of cards that is stock plot-development. Pictures of people talking, and more importantly, listening, can be more than illustrated radio. The French still make movies like that.

Although Devos has become a substantial star on her home turf, she displays the kind of expressiveness seen more often in American movies in the faces and behaviors of character actors, rather than the well-heeled lead players. Her characters aren’t asked to experience some kind of spiritual transformation or to lead soldiers into battle—the “journey” doesn’t involve an identikit destination, a predetermined, predestined, pre-masticated ending, but the particulars along the way.

But most importantly, she simply has “it”: an actor who, as the saying goes, the camera loves, something beyond physical beauty. Mere charisma? Original Zen: someone you would gratefully watch on any journey. A few names off the top of the head: Luis Guzman. Marisa Tomei. Laurence Fishburne. Shu Qi. Jean-Pierre Leaud. Bruno Ganz. Richard E. Grant. Danny McBride. Tom Wilkinson. Elias Koteas. Warren Oates. Bruce Greenwood. Like termites, they bite through the fabric of the rote story unfolding. (Thelma Ritter in Sam Fuller’s “Pickup on South Street”: she sells multitudes.)

I’ll confess to a couple of other actors that when I see their name on posters, I get the willies. But, just as I’m seldom disproved in my sneaking suspicions that Ben Stiller will play a character that seems ready to scratch his skin off from nerves and physical discomfort, there are actors I’d watch in just about anything. Say, Chow Yun-Fat in “The Children of Huang Shi.” The director Roger Spottiswoode told me he had to be careful in that recent film about just how far back in the frame Chow was in some scenes: he could be fifty feet away, lighting up a cigarette, and your eye is immediately drawn, fixedly, toward his gestures. Godard said something once about the movies having, in the time since Griffith, forgotten about the wind in the trees. It’s good to remember wind in the hair, too, and the transport that can play across a face in that simple instant of communing with nature.

“Two Lives Plus One” opens Friday at Siskel. Some bad movies, too.