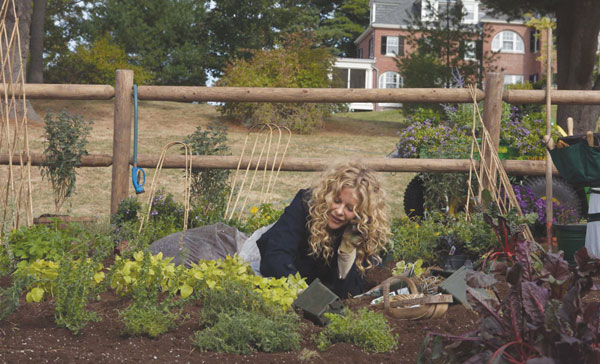 Television producer-writer Diane English makes her directorial debut at the age of 60, a rare privilege for someone who’s never directed anything, on a project she claims to have been working on in the earliest years of the Clinton administration. (It may be one of the most ramshackle movies made by a major studio since the early 1990s as well.)

While softening George Cukor’s 1939 cat-fest of the same name, which also featured, in Clare Booth Luce’s script from her own play, the conceit of having no men on screen (unless you count a Santa caricature on the door of a delivery room), English’s comic worldview exists in some vapid netherworld, a freeze-dried, vacuum-sealed perspective that draws mostly from early 1990s sitcom-style delivery, with badinage served with table-tennis-style cutting. (“I am famous for my intolerance!” is a brittle height.) It’s no small wonder that the only actresses who come across with any panache are the pros from television—Cloris Leachman with her immaculate timing and purring intonation as a servant with immaculate timing and Candace Bergen (from English’s “Murphy Brown”) as the protagonist’s foul-mouthed mother.

Oh Meg Ryan. When Meg Met Diane. Meg Ryan, lost under an impossible mess of curls—a cross-breed, say, the “Megoodle”—plays a whiny, selfish, self-lacerating mess whose self-actualization after a series of complications leads her to discover female friendship is the most important thing of all, especially if everyone you embrace is a whiny, selfish, self-lacerating mess, stressed, deeply lonely and desperately wanting to get knocked up to feel complete. The seldom-seen Annette Bening, who could sell the strenuousness of her character in “American Beauty,” is unable to withstand English’s inexperience as a magazine editor whose insufferably, insupportably lame inspirations would not pass muster in a very special episode of “Two And A Half Men.” Fourteen years for this drably lit, unimaginatively framed, edited and decorated bunkum? Mehhhh.

“The Women” has two passages that pass for cinematic image-making. Cukor’s original was shot in black-and-white with the exception of a reel-long fashion show, lit in bright, broad Technicolor swathes. The fashion show here starts as black-and-white before moving to what the characters call “jungle red,” after a favored shade of nail polish. At almost the very end of the film, a helicopter shot swoops over the Hudson River, and standing center frame, tall, bold, timeless, is Lady Liberty. A nice idea for a better film, especially one that did not end, post-credits, with out-of-character interviews with the cast as themselves, reinforcing the up-with-women bromides of co-producer (and featured player) Dove soap.

None of the lighting is flattering to the actresses’ idiosyncratic beauty, let alone their age. A shot of Meg Ryan’s banged-up shins as her character has one of her clichéd panic attacks while atop an overstuffed bed is one of the few milliseconds that suggested experience, beauty and even, dare I say, down-to-earth sexiness. Bette Midler has a brief sit-on where she mocks her own delivery style while caricaturing the late, near-forgotten agent Sue Mengers. (She plays hip, as in “surgery.”) Eva Mendes is brought on to shake her rump in expensive lingerie; Debra Messing is a straggled mess of a multiple mom; Jada Pinkett Smith is a lesbian stiletto-cum-essayist and the brilliant Carrie Fisher is unrecognizable. (There’s a weird recurring mention of Bening’s editor having offered an advance for Pinkett Smith’s new book, suggesting some pages of earlier drafts slipped in while no one was looking.)

Music supervisor Chris Douridas slides some gentle pop songs into the mix, but there is one sound issue: an enormous number of shots involve people delivering important lines of dialogue or cracking jokes while their heads are turned away from camera, yet another sign of the film’s troubled production, with ADR (automatic dialogue replacement) of new dialogue in postproduction used to paper over problems in script, blocking and performance.

While I’m one of the great admirers of Bob Berney, the head of Picturehouse, which is extinguished after this release, and the fireworks-bursting logo of which offers a moment of juice at the film’s very start, just before an opening shot of the film proper, that apes the Miramax logo, I have to give more credit to the marketing chops of Lionsgate, which is cannily opening a Tyler Perry picture with Kathy Bates the same weekend as “The Women.”