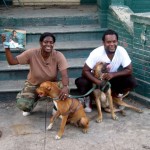 Three years ago, the United States abandoned a great and vital city to weather and death. The levees that surround New Orleans still haven’t been fixed, whether from purposeful or malign neglect. History will judge.

Tia Lessin, Carl Deal and Kimberly Rivers’ much-praised and Sundance-awarded “Trouble the Water” is a despairing document. Anyone who’s been to the Crescent City or stays atop current affairs knows how bad things have been, how education and opportunity are neglected by the city and state of Louisiana and how the tides that lick and lap the Bywater and surrounding areas are upon all our ankles. But what ought to be salt holds no savor.

Through most of its dark distance, along with the witness of 24-year-old Kimberly Rivers’ Hi-8 video footage taken while she and friends and family and occasional dogs are stranded in the city as the weather hits and the waters rise, there’s an undercurrent where “Trouble the Water” could be read as a wicked satire of liberal pieties rather than a portrait of survival and dignity in the face of systemic disdain, belittlement, disregard and disenfranchisement. Rivers’ footage is a happy incident. Werner Herzog in early years counseled the theft of cameras if it got a movie made. Other crimes are committed daily nowadays, esthetic ones, bought straight off the shelves of Best Buy and Circuit City. These grimy images are another story, and a better one.

The fact that Rivers rises above the current and most of those with her survive is grand, and the obstinacy it takes to keep running a camera until the “juice” runs out intrigues. Yet the overlapping time frames, eddying ever again back to the horror and terror of days like night gray with rain, are in the service of a story where the only escape is rap music, words delivered at film’s end in an almost-unbroken take, an extended rap of self-esteem from a resilient soul rife with swears of “motherfucker” and “cocksucker” and “motherfucker” some more, to bookend earlier refrains of lip-service to an unlearned, unlettered religiosity pronouncing itself as faith, the figures on-screen as convinced as the zealots who prayed for the city’s destruction that only God can change things, only God. Man’s follies are hinted in news footage, but not underlined. That is unless you count when a white clerk from the tourism board is mocked at length for her chirpiness, a piece that would not be out of place in a misjudged moment in a Michael Moore movie. (Moore is an active supporter of “Trouble the Water.”)

There’s a brilliant framing by Rivers that the directors return to, taken from a relatively fixed perspective from the occluded lookout in an attic in which they might drown, rot, burst and be forgotten, of a stop sign’s octagon with the blades of street names atop that four-letter word, STOP, obscured by chop in unnatural waters, frame strewn with the string of power cables still true and falling into the drink, a dozen diagonal-fashioning elements as grainily abstract as the theatrical guying of drawn lines in work by the great artist Richard Diebenkorn. “We undersea, truly, we undersea,” Rivers murmurs. 911? 911 answers, but has neither answers nor help. Helicopters linger above a blasted city under siege. The water rises with brute, inarticulate force. The figures on screen repeat, repeat, “Y’know what I’m sayin’?” “New Orlins? Dead like a <i>motherfucker</i>.”

By movie’s end, you’re demolished, but for the wrong reasons. There is no elevation. There is no hope. People died. Hundreds of thousands others lived. There is nothing to inspire, either before or after the waters. Systemic change isn’t possible, the movie seems to say. But you can record a song. Make an angry sound. “Trouble the Water” seems not to seethe, but ultimately to accept that forces are larger than its figures privileged on screen. We’re left with a parable that could well be entitled “Hustle And Blow.” The taste that’s left, if not despairing, is then deeply reactionary, embracing the many variations on “This is the Lord’s work” as expression of inculcated, acculturated defeatism. This is not a picture of perseverance on a level with Steinbeck and Ford’s fictional Joad family. By inference, there is much proper condemnation, but the text is filled with the inarticulate resignation and despondency of beaten-down faith: “You just trust in God, he’ll still send miracles your way.” Other glimmers leave a portrait that the displaced of New Orleans were all luckless perps. While a rebuilding epilogue is sweet, the movie is bitter.