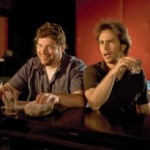 David Fincher’s adaptation of Chuck Palahniuk’s “Fight Club” ends with a meltdown, an apocalypse of sorts, a cataclysm that triggers the collapse of the credit system.

An ending like that may be more timely than the one of Clark Gregg’s (screenwriter of “What Lies Beneath”) adaptation of Palahniuk’s lesser, less-read “Choke,” which in final form, mingles compulsive sexual addiction, convulsive faked choking, Colonial reenactment theme parks and faith that grows from the ostensible foreskin of Christ. But the real world can take care of the major apocalypses without this week’s new movies.

Ever-watchable Sam Rockwell’s fans know his many roles and whom everyone else seems to recollect, “Oh! The quiet actor with the volcanic hair!” He stars as Victor, a med-school dropout who has to face the increasing dementia of his hospitalized mother (Anjelica Huston). On the side, he finds community and cash by faking choking accidents at restaurants and allowing himself to be a kind of reverse savior of the affections of strangers. By day, he works at a Williamsburg theme park (an apocryphal one, not the neighborhood theme park in Brooklyn), facing fines or time in the stocks if he acts in any way out of the era. There’s a shapeless subplot about a friend, Denny (Brad William Henke), who provides a foil for Victor to explain himself, and who fashions a perfect love for a stripper to replace his uncontrollable masturbation. More productive is Victor’s weird relationship with Paige (Kelly Macdonald), white-coated but dark-hearted at the mental hospital. Could he, a sponsor, give up going to meetings and banging those who trust him for the love of Paige? And will his mother ever tell him who his father was before she’s gone in one fashion or another?

A wicked stew of dependencies, which move on and off the screen at regular intervals. A fear of conventional intimacy alternates with the desire of nurture by some larger, outside force. The ending, however, wholly at odds with Palahniuk’s impulses, is a touching thing, where two characters are allowed to find some kind of romance and passion, molding their sexual obsessions into one in a sustained close-up of several minutes, scored to the aching “Reckoner,” by Radiohead. “Choke” is one of those movies like “Birth” where dizzying, odd zigs and zags leave intentions blurry, yet ends with a gorgeous and moving, if contradictory, ending.

Rockwell abides to convincing effect even when his character is trying to comprehend the peculiar developments involving Christ’s foreskin, and in person, he’s charming on the subject of acting. In Chicago one sunny afternoon, wearing a green t-shirt with a “Pirates arrr cool!” design, digging a Newport of matching green from a Ziploc bag, he concedes he’s an “acting geek.” While he’s intrigued when I ask whether journalists generally find a common vocabulary in which what acting can be discussed, he’s ready with films to cross-reference and actors to praise and scenes to go “aw, man!” over. Among them: “One Flew Over The Cuckoo’s Nest,” “The Deer Hunter,” “Stripes,” “Animal House” and Richard Pryor in “Bustin’ Loose.” “I have a strange group of heroes,” he says with a small smile.

“I set high standards for myself. Everything’s been done,” he says. He’s about to play an alcoholic basketball coach of a girls’ basketball team. “Once you accept that, well, ‘Bad News Bears,’ that’s the best of that. You don’t get better than Walter Matthau. I just think about how to do it better in my own way.” He reflects on “Choke” in an aside: “Very ‘Glass Menagerie,’ all that stuff. That Oedipal stuff.”

Of supporting roles versus leads, Rockwell observes, “There’s a lot more waiting around. Especially on studio films. I don’t like that as much. I like to show up and <i>act</i>. I don’t want to sit around. I want to get up and do <i>shit</i>. I’ve been a day player and I’ve done episodics like ‘Law & Order.’ I feel for day-players. It’s not easy, it’s nerve-wracking, in fact.”

And in lead roles coming up? “You’ve gotta let ’em know what you need without being a dick. It’s a fine line.” Rockwell goes to light another cigarette. The match flubs. Another one snaps. The head of a third, lit, flies. “These are trick matches! Look at the bullshit.” Finally it lights. “I can be kind of a clown.” Takes a drag. “It’s all the same to me, it’s just talking.”

“Actors used to come from theater,” he reflects about the 1970s era he reveres. “Meryl Streep, DeNiro, John Cazale.” Cazale, who died young, was in “Deer Hunter,” “Dog Day Afternoon” and Fredo in “The Godfather” and “The Godfather II.” “An apprenticeship teaches you respect for the craft. You’re a spear-carrier, and eventually, you get to play Romeo or Mercutio.”