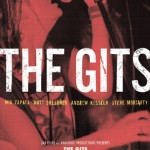 Influential Seattle punk band The Gits came to a tragic, premature end in July of 1993 when their lead singer, Mia Zapata, was raped and murdered. The man responsible wasn’t caught until 2003. Los Angeles-based filmmaker Kerri O’Kane sets out to tell the story of Zapata and her criminally under-appreciated band in the new documentary, “The Gits,” which screens this Saturday at Green Lantern Gallery in Wicker Park. “I wanted to do it as soon as I realized that nobody else had done it,” O’Kane says. “I couldn’t believe nobody had made the film…there were a lot of Web sites dedicated to her, I wanted to find out more about her, and the band. I wanted to see this film.” In the film, O’Kane conducts interviews with the surviving band members and Zapata’s family, as well as friends of the band from the Seattle music scene. When O’Kane began filming, Zapata’s murderer hadn’t been found yet. “At first our reaction was shock,” the filmmaker says, “an absolute shock.” O’Kane says the intention of her film is to celebrate a band that deserves more recognition. “I wouldn’t have embarked on this if the music was crap,” she says. “I was shocked I hadn’t heard the music [sooner], and the reason I hadn’t was because Mia was murdered right before their big break. It’s time for the rest of the world to know them…and I hope the legacy changes from their lead singer getting murdered to, ‘Wow, what a great band.’” (Tom Lynch)