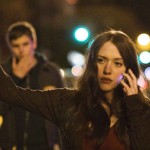 That Buzzcocks lyric was ringing in my ears after the end credits of Peter Sollett’s fine second feature, “Nick and Norah’s Infinite Playlist,” which comes six long years after his superb debut, “Raising Victor Vargas,” a glorious, full-blooded, oft-profane, fully inhabited microcosm of life and love among teenagers on New York’s Lower East Side. Bubblegum that never loses its snap, Sollett’s second feature miraculously hits some of the same heights within a slightly contrived structure drawn from the novel of the same name by Rachel Kohn and David Levithan. Nick (Michael Cera) is the straight member of a “queercore” band who’s made a desperate succession of mix CDs for his ex of three weeks. After opening a show on the Lower East Side for indie band Bishop Allen (a neat nod to Andrew Bujalski’s “Mutual Appreciation,” built upon that band and its lead singer), in a room charged with misguided attachments and sudden flirtations, Nick meets Norah (Kat Dennings), and their shared taste in music is only the start of a long night of discoveries, including the quest for a secret show played by a band called “Where’s Fluffy?” (Dopey name, but Sollett knows just how to play it: the characters act like they’re sussing out how to get to an epic revelation like My Bloody Valentine.)

One of Norah’s jokes in the advertising, “I don’t want to be the goody bag at your pity party,” is about as close as the humor gets to “Juno”-land. There’s clever wordplay throughout, but not of the Diablo Cody ilk (which I admire as her characters create their own stylized world from word one), but of a sort that suggests that Nick and Norah are smart teenagers who live lots of their life in their heads, and when charmed, pearls of interior monologue revealed fumble from their smiles. (Cera continues to underplay. There’s one smile he throws, however small it may be, that arrives with force that in relative scale approximates Jack Nicholson going off on the waitress in “Five Easy Pieces” and requesting that she place the chicken salad between her knees.)

Sollett guides his performers to an economy of gesture even in cartoonish moments (a scene with an overflowing toilet manages to suggest “Trainspotting” and hold back the disgust with ease). The knack lies in the generous editing of interaction, and the behavior observed is richer, deeper than the plotted action that allows the characters to jape and cajole. The genre of teen comedy and one-night-in-the-city after-hours is more defined than in “Vargas,” yet the accomplishment is equally fine: as director, he crayons within the lines, and the result is precocious and dear, a romantic comedy that eludes its requirements of plot to revel in its attention to behavior, nay, I would go so far to claim, to being. Every scene is suffused by the grace of surprise. Do you know the breath that catches in just that second when you’re looking toward the just-round face? Sollet’s rhythms are right, held just enough until you know the dizziness in much more than a matter of oxygenation.

The sleight-of-hand is terrific, the film functioning as a deliberative taxonomy of mutual and eventually reciprocal attraction, while well within the boundaries of a poppy, confected teen romance. This ain’t mumblecore. And “Juno” what? The sensation of freshness works until the very last scene, capturing shopworn sensations well remembered by anyone whose heart’s past teenage and the first half-dozen hurts felt or dealt, meted or memorialized. None of these moments feels cauterized or even in need like wound.

There is a shot in Joachim Trier’s “Reprise” that measures out the one-two-three-four-five just-like-that before a man and woman’s gazes fatefully match in a crowded bar. Trier orchestrates a number of elements with lighting, blocking and camera motion that elevate the thrill. Sollett’s gift is simplicity: as in “Victor Vargas,” and working with D.P. Tom Richmond, he finds focal lengths and frames to encase one character, then the other, for the ideal balance. The result is consistently as fresh as a smile evoked by a frolicsome pup on the street. Listen, look. That’s what this film does.

The city’s present, too. Sollett’s topographical exactitude toward New York City, especially involving the Lower East Side and East Village, from Arlene Grocery to Veselka, suggest his own youthful NYC life a good decade ago (however much might be carried over from the source novel). We’re left with a timeless night of now and then that ends on yet undreamt dreams of son and sensation, of touch and tickle, descent, ascent, swoon and fuck. Everything’s possible in Michael Cera, I mean Nick’s tremulous, fearful wanting liquid eyes once he truly catches sight of the woman in front of him and Kat Dennings’, I mean Norah’s, keen-to-be-incredulous smile and yeah-right purrs of satisfaction.

These environs of Manhattan are less canvas than ground, the space to capture deft, moony impression of love found, savored and aptly recaptured from fond, mature remove. Tactile, and between Cera and Dennings, always ineffably in the moment. This is Eric Rohmer territory. And this is how two people look at each other, then flinch, gawp, roll eyes or look away in tender fear. Intimacy of such effortlessly unassuming precision could be mistaken for mere charm. And bravo for that. Sometimes you fall in love without someone you should fall in love with.