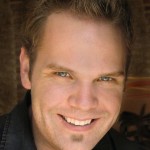 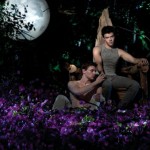 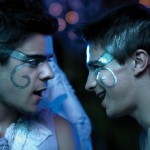 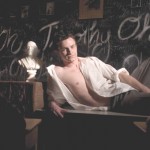 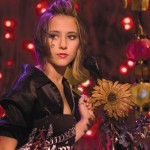 Timothy pines for his all-boys high school’s rugby star. He faces daily abuse at the hands of his classmates, but finds liberation onstage as the mischievous fairy Puck in a musical version of Shakespeare’s “A Midsummer Night’s Dream.” The play’s all-male casting tears open masculine insecurities—which are only compounded when Timothy finds a way to win his love’s heart and make the whole homophobic town of Kingston walk a while in his shoes.

This is “Were the World Mine,” an exuberant, locally shot musical by area native Tom Gustafson that comes off a hot festival run to have its local premiere October 24 as part of the Chicago International Film Festival.

Gustafson, 32, grew up in Genoa, a town of 4,000 in DeKalb County. “The scene where the kid gets ‘fag’ written on his locker—that happened to me,” Gustafson says. “I was made fun of for being gay even though I wasn’t out and didn’t really know it. It bothered me on a personal level but it also inspired me to do bigger things. I knew it was temporary because I knew I was leaving.” He dreamed of moving to Chicago, where his mom took him to touring musicals and his older brother lived.

Gustafson’s whole family is artistically inclined and he always wanted a life in the arts. “I never had that ‘Billy Elliot’ moment,” he says. In the fourth grade he started playing trumpet and made his first foray into cinema: a claymation cautionary tale about street-crossing safety. He was a self-described “band and theater dork,” playing Jesus in a Genoa Kingston High School production of “Godspell.” Like Timothy, Gustafson’s drama group fought their own miniature culture war over space in the school’s “gymnatorium” that they shared with the basketball team.

His creativity bubbled over throughout his school years. “We had to do a book report and I decided to do a ridiculously cheesy tribute to ‘Phantom of the Opera,’” Gustafson says. “That was tragic. Hopefully no one will ever see the tape.” He caught the film bug during two summers as assistant manager at the Polka Brothers’ second-run theaters in Sycamore and Geneva, where he assembled film prints and spliced together trailers. “I fell in love with being in that world of cinema,” he says.

In 1994 Gustafson enrolled in the film program at Northwestern, where he finally came out. Northwestern was “a very accepting environment,” he says. “At that point sexuality wasn’t even an issue.”

An affinity for outsiders led Gustafson to a fascination with circus freaks. He took circus classes at the Noyes Cultural Arts Center in Evanston and landed some “random clown gigs” around town. After his junior year, he did a summer session at the San Francisco School of Circus Arts. “It ripped me to shreds,” Gustafson says. “We had teachers who were Chinese acrobats. We had to do handstands for two hours every day. It was so painful.”

That was the end of Gustafson’s performing career. “I realized I was more comfortable behind the camera,” he says. But the circus did inspire his Northwestern thesis film, “The Need,” about a circus freak called The Half Breed and her desire for a child. “I wanted to raise the bar on film at Northwestern,” Gustafson says. “I really tried to make it big. We built a circus midway in a closed-down auto shop.”

After graduating in 1998, Gustafson worked as a production assistant on Michael Moore’s Bravo series “The Awful Truth.” Gustafson “absolutely hated” PA work. “You go from doing the biggest thing in school, and suddenly you’re at the bottom of the ladder,” he says. Around this time, at Berlin nightclub, Gustafson met Cory James Krueckeberg, an actor and U of I grad originally from Fort Wayne. They’ve now been together ten years.

Gustafson spent three years as assistant to a headshot photographer, and then opened his own studio in the Cornelia Arts Building, doing headshots and press photos for About Face, the Theatre Building and the Bailiwick. In 2002 Gustafson landed a gig as assistant to additional casting director Judith Bouley on Sam Mendes’ Paul Newman-starring mob melodrama “Road to Perdition.” “We went out into the neighborhoods to find real people,” Gustafson says. “We did casting calls at pubs and community events to find Irish dancers. It was like a little scavenger hunt.”

Gustafson accompanied Bouley to Mexico as casting associate on the Russell Crowe pirate movie “Master and Commander,” finding extras who’d be believable as English people and Spaniards. He saved enough money from “Master and Commander” to bankroll a short film he’d been talking up in Mexico called “Fairies.”

Drawing on his own high-school experience, Gustafson wanted to tell the story of a lonely gay teenager who creates a potion to turn the straight world gay. Krueckeberg suggested the connection to “A Midsummer Night’s Dream,” in which lead fairy Puck induces love at first sight among a crew of mismatched lovers. “Fairies’” main character Timothy expresses his outsize desires in fantasy musical sequences on theatrical, charmingly homemade sets designed by Krueckeberg.

Gustafson’s breakthrough came when he found Wendy Robie, who’d played the eye-patch-wearing Nadine on “Twin Peaks” and was now working in Chicago theater. A former English teacher, Robie was drawn to the role of Timothy’s mentor, and she helped Gustafson deepen and expand the role. “She brought the mystery and magic and the force of inspiration that a teacher can give somebody,” Gustafson says.

“Fairies” filmed in 2003, played a hundred film festivals and was broadcast on the LOGO network. “It was incredible to see the response people had to the film,” Gustafson says. “It was very joyous. So many gay films are so pessimistic. Ours is so fun and optimistic. A lot of gay films are just about sex and shirtless boys. Ours has a little of that, but it doesn’t have to be that to be entertaining. It doesn’t have to have all the stereotypes of gay film.”

After “Fairies,” Gustafson and Krueckeberg moved to Harlem, where they live today. Krueckeberg worked as a theater actor, director and production designer. Gustafson traveled casting extras, in the Bahamas for the “Pirates of the Caribbean” movies, in Chicago for “Batman Begins” and “The Weather Man,” in the Dominican Republic for “The Good Shepherd” and in New York for “Stop-Loss.” “I’ve been lucky not to do casting in cities that are jaded by the industry,” Gustafson says. “People are so excited about it. The one job I did in New York was a very different experience.”

Flying home from LA’s Outfest, Gustafson and Krueckeberg resolved to turn “Fairies” into a feature film. They knew there was more of the story to tell, but they didn’t imagine the struggle they would face to finance and cast the film. “I naively thought that it would be easy to get the money—that because I was working in the studio system a lot of people in the industry would come to my aid, which was silly,” Gustafson says. After several years of seeking industry financing, Gustafson and Krueckeberg were finally able to raise their full $300,000 production budget from private investors, only once they pulled the trigger and began preproduction on the film. “Finally the only way this was going to happen is if we just said we were doing it,” Gustafson says. “We packed up the car and started driving to Chicago.”

They shopped the script for “Were the World Mine” to agents for top teenage actors, including one of the stars of “High School Musical.” “We immediately encountered resistance to their clients playing gay,” Gustafson says. “I was shocked. I thought we had moved beyond that. It would have been different if a studio says ‘We want you to play gay for a lot of money,’ but we were an indie. In the end I’m glad we didn’t get those people, because our cast is incredible.”

They found their lead, newcomer Tanner Cohen, at an open audition in New York. “We knew right away we were interested in him, and from the moment he landed in Chicago I knew he was the right choice,” Gustafson says. “He’s extremely confident about who he is, and he’s six-foot-five, which brought a whole ‘nother layer—he could turn around and beat the crap out of the people who were picking on him.”

With Robie reprising her role as the English teacher, they cast Broadway’s “Mamma Mia!” star Judy McClane as Timothy’s mother, Robin Williams’ daughter Zelda Williams as his best friend and Chicagoans Christian Stolte as the bigoted rugby coach and David Darlow as the stiff high-school principal. (Stolte steals the show when Timothy gives the macho coach an extra spring in his step and a new affection for his boss.)

With most of the creative team from “Fairies,” Gustafson and Krueckeberg moved into a house in Roscoe Village that doubled as their production office and the set for all their house interiors. “Our production coordinator slept in Timothy’s bedroom throughout the shoot,” Gustafson says.

They’d considered shooting in New York, but Illinois’ film tax incentive, their collaborators here and “Fairies”’ local roots made Chicago the natural choice. “Chicago is such a manageable city to shoot in compared to New York,” Gustafson says. They shot for four weeks in summer 2007 with a mostly local cast and crew, recording musical performances between outbursts of the seventeen-year cicadas.

“Were the World Mine” premiered in March at the Florida Film Festival, where it won the audience award. “It was great that it was a mainstream festival,” Gustafson says. “It showed that our goal not to put it in that ‘gay film box’ was actually working. It’s frustrating to audiences when they’re told who a film is for. It’s important for us to reach that niche audience, but it’s not just gay people that can relate to this story. We’re not just preaching to the choir.” The film has gone on to an acclaimed festival run, winning the grand jury prize at Outfest and best music at the Nashville Film Festival.

They got some offers from distributors who wanted to buy all rights for the film, but they opted for the increasingly prevalent option of dividing the distribution markets among multiple distributors, allowing the filmmakers to retain control of the release strategy and a greater share of any profits. “It didn’t make sense for us to give away so much control and so much of the film to one entity that cross-collateralizes the money,” Gustafson says. “If we broke it up there would be less risk and each platform could do better. This has been such a labor of love for so many years. Cory and I controlled everything about the production. We wanted to make the decisions about how this is marketed and how it gets out into the world.”

Gustafson and Krueckeberg are self-releasing “WTWM” in theaters, mostly through the Landmark chain, beginning Halloween in Louisville, followed by New York, San Francisco and Berkeley in November, San Diego in December and Philadelphia in January. They haven’t announced a Chicago theatrical booking yet.

Wolfe Releasing is scheduled to put out the DVD in April 2009, preceded by a video-on-demand release in February, and followed by a summer iTunes release. LOGO plans to begin broadcasting the film in July, and Gustafson is also hoping to get play on LOGO’s sister Viacom networks (which include MTV). “WTWM” will open in Germany, the U.K. and Australia next year as well.

Gustafson and Krueckeberg are working on a short film called “Revelations,” about a hate group modeled after Fred Phelps’ funeral picketers. Then next summer they hope to be back in Chicago to shoot the American leg of their next feature, “Mariachi Gringo.”