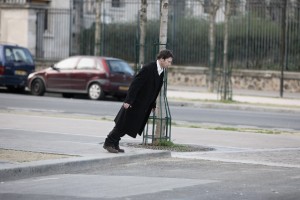 Of all the things you could possibly say about the potential of this year’s installment of the Chicago International Film Festival, I’ll start with two: most of the attractions are at two theaters within walking distance of each other, the River East and 600 North Michigan, and of a claimed 175 movies, I’ve seen or can easily recommend a fine total of thirty-eight.

Some will open during the run-up to the year-end awards gauntlet, while others have less chance of being seen elsewhere. Chinese director Jia Zhang-ke continues his explorations with documentary-fiction hybrids in “24 City,” a fascinating critique of socialism in contemporary China. Veit Helmer’s German-Azerbaijani spaghetti-sex-comedy “Absurdistan” posits the world as an eternal backwater ruled by, well, water and women, an equally intriguing perspective. Then again, your life could be a series of repeated gestures year after year and song after song like in the passion of the metal-comic doc, “Anvil! The Story of Anvil.”

Lance Hammer’s “Ballast” is spare American regional filmmaking of uncommon delicacy, while Mike Leigh’s latest, “Happy-Go-Lucky,” partakes equally deeply of the concerns of compassion and empathy. French novelist Philippe Claudel’s “I’ve Loved You So Long” is reed-delicate and wire-taut, as rich as the kind of prose that mirrors life, with a bold central performance by Kristin Scott Thomas as a haunted middle-aged woman. Utterly evanescent but also lived-in is “Nights and Weekends,” by Greta Gerwig and Joe Swanberg as a long-distance couple in New York and Chicago, more long distance than couple. The glimpse we have of their lives is only the moments of incomprehension, only disconnect. The characters are ill matched and ill starred; the filmmaker-leads palpably suggest the failure of modern romance. A different take on the world today: Danny Boyle’s latest, “Slumdog Millionaire,” about an 18-year-old Mumbai orphan who competes on India’s version of “Who Wants To Be A Millionaire?” Streets teem, lives dance. And, reflecting a pornography-filled culture, there’s the casual obscenity of Kevin Smith’s “Zack and Miri Make A Porno,” which, in a matter of speaking, starts at snowball and snowballs from there.

Charlie Kaufman’s “Synecdoche, New York” is a world within worlds within the veteran screenwriter’s head, to drenching, wrenching result. (I’m moderating Sunday night’s Q&A with Kaufman.) More drama: Darren Aronofsky’s spare “The Wrestler” boasts a painfully physicalized performance by Mickey Rourke as a man whose body is his life, to the threat of both; thematically and acting-wise, Marisa Tomei is his equal as a stripper he knows not well enough. Chicago-set torment is on-screen in “Wesley Willis Joyrides,” an assembly of material about the late, troubled Chicago musician.

Terence Davis, who hasn’t made a movie since 2000’s “The House of Mirth,” returns in smashing form with the “Of Times And The City,” an elegy to his Liverpool hometown that is both comic and heartfelt, sardonic and emotional. American sense of place: Kelly Reichardt (“Old Joy”) returns with more Pacific Northwest minimalism with “Wendy and Lucy,” with a radiant Michelle Williams center screen as a needy woman whose life revolves on her car and her dog. That’s not to overlook special screenings at the Music Box of a restored print of Sergio Leone’s “Once Upon a Time In the West,” as well as John Cassavetes’ “Faces.”

Films from other cultures are always important for an idea of lives lived, sidewalks walked. Jerzy Skolimowski (“Moonlighting,” “Deep End”) reportedly returns to Polish-absurdist form with his “Four Nights With Anna.” The great Arnaud Desplechin (“Kings and Queen,” “My Sex Life, Or, How I Got Into An Argument”) returns with “A Christmas Tale” (pictured), a two-and-a-half-hour family comedy-drama that attains as many mysterious heights as his earlier work. Ace Icelandic editor Valdis Oskarsdottir (“Julien Donkey-Boy,” “Eternal Sunshine of the Spotless Mind”) debuts with “Country Wedding,” a road movie about two busloads of Icelanders heading off from Reykjavik to a wedding in the countryside with the expected perplexing comic result amid the grand volcanic landscape. “Be Like Others” is a documentary about the Iranian perplex where homosexuality is punishable by death, but sex-reassignment surgery is encouraged: the concept is mind-boggling, and Tanaz Eshaghian does a fair job balancing the personalities of her subjects.

Other notables: Abdel Kechiche’s “The Secret of The Grain,” an explosive admixture of family and food with rich, unpredictable outcomes. Cai Shangjun’s “The Red Awn” is a diverting family drama on a distant Chinese wheat farm. Nina Paley’s “Sita Sings The Blues” is an animated adaptation of the Hindu epic “Ramayana,” mingled with the story of a modern divorce, combining music and images to captivating effect. Nacho Vigalondo’s “Timecrimes” is bright modern sci-fi; Kiyoshi Kurosawa, known for his eerie tales of the otherworldly, works in the genre of family drama, reportedly with the same impact; and James Gray’s “Two Lovers,” which debuted at Cannes to decidedly mixed reviews, transposes bits of Dostoevsky to a somber, contemporary New York romance. Sincere or overstated? Like many of the sweet surprises to be found at any good film festival, it might be a little of both.

Visit chicagofilmfestival.com for a full schedule.