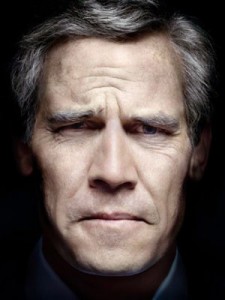 Too soon! Oliver Stone’s “W.,” a bushwhacked insta-biopic of George W. Bush, the sitting forty-third president of the United States, plays like Chicago improv comedy being played underwater. Each performer has their shtick down, to often productive result, yet fails to serve the picture overall, hardly playing off other characters at all, failing to give them air or even the entrée to breathe. Which may be appropriate, considering the blinkered, daddy-fixated solipsism of Josh Brolin’s Bush, played as a proudly ignorant frat-boy philistine and headstrong failed businessman. Richard Dreyfuss’ Cheney is filled with proud malice; a late, profane exchange between he and Jeffrey Wright’s Colin Powell is choice. Sins include Scott Glenn’s Donald Rumsfeld, nicely cadencing the man’s arrogant “snowflakes” of circular reasoning, but capturing none of his steely intolerance and suggesting him as a side character in the doings of war. Thandie Newton’s Condoleezza Rice is the wackiest, a nasal, whiny appropriation of Amy Sedaris’ Jerri Blank character from “Strangers With Candy,” down to ferrety overbite, surely less than the figure cut by a woman who dresses in “Matrix”-like black leather dusters and requires diplomatic missions to endure her piano recitals. The anecdote-chocked script is filled with footnote-able frissons for those who’ve kept score the past near-eight years, but in the end, “W.” is mostly a dance of unresolved family issues, largely in the form of Bush’s Poppy, played by the towering James Cromwell. Otherwise, it’s a helter-skelter convocation of Rosencrantzes and Guildensterns, with no Shakespeare in sight. The scene of the power brokers lost on a dusty Texas road near Bush’s ranch is an amusing riff on a similar situation in several Buñuel films, including “The Discreet Charm of the Bourgeoisie.” 122m. Widescreen. (Ray Pride)