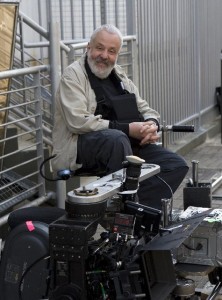 Ever since its Berlin debut, I’d been anticipating Mike Leigh’s “Happy-Go-Lucky.”

Something seemed so bright and right about the irrepressible central figure in the trailers and clips and stills, a 30-year-old primary school teacher nicknamed “Poppy,” played by Sally Hawkins. The promise of an offhandedly serious movie with a light surface described through behavior, told through a bright, brash woman with the most generous of heart seemed solid.

But the actual movie is a wallop all its own, thankfully, gratefully. Leigh, whose films include “Naked” and “Secrets And Lies,” works for extended periods with actors to create his scripts, drawing upon the experiences of all involved. The result, at its best, is enthralling. Under the credits, we see Poppy on her bicycle, moving through London traffic with expressions of confidence and curiosity: an image of someone confident in their life moving through the world. Hawkins is a petite brunette with an enormous smile, radiating genuine charisma. When she returns from an encounter with a grumpy clerk at a bookstore, the bicycle’s gone. “We never even got a chance to say goodbye!” Poppy says to herself. It was only the first of many moments falling in love with a character: several scenes sketch in seeming irresponsibility and her giddiness with her female friends, but we soon discover her real place in the world, in a classroom filled with children. Sunny, chirpy, almost obnoxiously so, Poppy embodies the ideal that compassion should be extended to all, that dignity is everyone’s right. (There’s a central encounter with a stranger I won’t describe where language falls away and empathetic listening is all.)

London matters. Poppy’s grounded in the places she frequents, where she meets her friends, the streets where a series of increasingly fraught driving lessons take place. She seems, in the phrase of Walter Benjamin, to know that a city’s learned by getting intelligently lost.

Leigh always provides a splendid, lived-in sense of place. Talking to the 65-year-old director last week, I wondered why this is such a part of his work. “It just is. You see… For all that you’ve read and that everyone says, of course I make films about people, it’s about character, it’s central to the whole thing. I’m equally concerned by fundamental instinct and by impulse, about making films about place as well as people… about time, about seasons, about weather, about light, about the things that any poet would express in a poem. I would say about smell, except obviously you can’t deal with that in film. And so, on the work we do, [it’s] always very, very thorough and we’re very specific. The specificity of what I do is important, of course, when I cast and, of course, what world, very specifically, these characters are rooted in. So the organic, the inevitable relationship between person, between character and place, the way the locations are part, are characters in their own right, if you like, is all absolutely central and integral. Or course, that isn’t to be confused in any shape or form with the notion that I’m concerned with making films about the specific environment or world, which is to say, you know, nearly all the films I have been made have been shot, and therefore set in London. Only because we could never afford to go anywhere else! Because the costs that are involved are preclusive. I’m now being called ‘cinema’s London poet,’ all this kind of stuff. But actually that’s the reason. But given that that’s what we’re doing, I simply drop anchor and say, ‘Okay, fine.’ But actually, the stories to be told are many and various. And actually, ‘Happy-Go-Lucky’ is no more concerned with being about London as such than ‘Naked’ or ‘Secrets and Lies’ or anything else. I hope that the films are universal, every story, every novel has to have its specificity and that’s its milieu.”

Leigh concludes, “London is great metaphor for the world. I’m not really concerned with that. But they are. ‘Happy-Go-Lucky’ could happen in Chicago, in principle.”

In Chicago, I note, I’ve talked to any number of teachers and educators, who, like Poppy, recognize how any individual child’s neglect or bullying could have repercussions we could never predict. Bluntly put, you fuck with one child, you fuck with the future. “Any child… And that is absolutely commensurate with what this film is about. Poppy is a very active [believer] in teaching kids as an act of optimism, nurturing the future.” It’s not the immediate future of the two hours of the narrative or two weeks in the child’s life, either. “No, non, no. The kids that Poppy is teaching are the grandparents of the late twenty-first century. They will be remembered by twenty-second-century citizens. If there are any.”