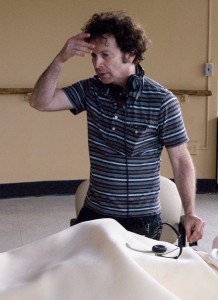 “A part that suggests the whole,” there’s the definition.

Funny in parts, too. But the most important aspect is the aftertaste: what is bitter and brackish and dour in the watching lingers afterward. There’s a medical term for the dull, almost pleasurable ache after a solid bruising (or, for men, a kick in the balls): “exquisite tenderness.” That’s what ebbs days after witnessing this grandiloquent edifice, a tower of babbling characters who are trying to create a work of art over the course of a lifetime that just happens to resemble Kaufman’s very enterprise.

Philip Seymour Hoffman stars as Caden Cotard, a shambling playwright of inchoate ambition. He’s mounted a production of Arthur Miller’s “Death of a Salesman” with college-age actors, and his wife, Adele Lack (Catherine Keener), paints portraits in miniature: tiny as a postage stamp, best viewed with a magnifying glass. Writ large, writ small, doppelgangers for almost all the characters brood and multiply after Cotard gets a genius grant and proceeds to create a vision of his life in a vast warehouse, and begins never-ending rehearsals.

After “Synecdoche”‘s Chicago International screening, I moderated an hour-long Q&A with Kaufman, and it was one of the more rapt audiences in my experience. Everyone had questions. Some were about the actors—Michelle Williams, Samantha Morton, Emily Watson, Jennifer Jason Leigh, Dianne Weist, Hope Davis, Tom Noonan—and the roles they play, often taking up the roles of other characters in the aborning masterwork. A few questions were about how Caden suffers physical maladies from the opening scenes that then reach across the remainder of his life. Kaufman has other concerns as well, such as an inspired image to strike terror in any writer, where Caden has post-its reaching not only to a vast indoor horizon but likely the foreseeable future of his life that remains. With 200 or so scenes, twice the number of most contemporary movies, any note of distemper or echo of personal fears is quickly matched by another dart-jab, duck-weave of narrative feint.

But I bring up the subject of the characters’ increasing awareness of mortality, and we compare ages. At a certain point in life, phlegm takes on new meaning, I joke. “Various color phlegm,” Kaufman says. “How do you rate your phlegm? Which is the same as checking the color of your stools.” (Which Caden does.) “This isn’t new for me, it’s progressive, in a kind of way. And there are more aspects to it now. Maybe it’s even easier as I get older. I have lived with that kind of nervousness about my health for a very long time.”

“It made you uncomfortable. Because of your age. Or your health concerns,” Kaufman continues. I ask, would a 25-year-old respond differently? “I don’t know. I don’t know. That might be an issue. I’ve shown it to a lot of colleges, and there seems to be at least an appreciation of it being different, which comes a lot from college kids more than, y’know… I had an old guy in the audience wherever I was before here, D.C., and he came up to me, he asked me during the Q&A how autobiographical it was. I don’t answer that. He came up to me afterwards, and he said, the reason I asked that was because of the doctor stuff. He really related to the way doctors treat him. The way it was represented in the movie. That certainly is my experience with doctors.

If you express something that other people feel in their own lives, then that’s a good thing. Even if it’s a sad revelation. You know what I mean? I’ll tell you what it is. I have a lot of different doctors that I go to for a lot of different things. Occasionally, I’ll come across a doctor, very rarely who will talk about his or her own health problems. Not at length, but they’ll mention something. It’s such a relief. For some reason, I have in my head that doctors… that I’m this pathetic organism and they’re not. Then you find out they’ve got this, or they’ve got that. Then I’m not ashamed to be me. I think a lot of it is the shame of having… having a body. Having a less-than-perfect physical existence. I think that’s perpetuated by doctors, who want to present themselves as kind of a godlike entity. I guess maybe some people want that from their doctor. But I don’t want that. I want to know that there’s a common ground and I don’t have to be embarrassed being a person. I think, in a way, revealing myself in my work, then maybe I’m giving somebody the opportunity to feel that connection.”

However dogged and confounded Caden may be, it also seems he doesn’t have the energy for suicidal ideation. “Well, he’s a romantic. In a way. Maybe. Could be. I’m not going to say,” Kaufman says in his measured stop-start. He’s trying to create art to the exclusion of an unsatisfactory life. “Yeah. Yeah. But it is his life, though. I mean, the life he creates is his art. My writing, for example, my work, is my life. I mean, it’s not. It’s not all of my life, but it is a large part of it. I don’t think I’m not living when I’m working. It’s what I do.”