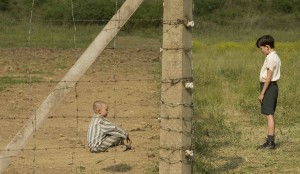 Writer-director Mark Herman adapts John Boyne’s 2006 novel for a cautionary tale of a boy looking for a new playmate in a concentration camp. “The Boy in the Striped Pajamas” begins in early 1940s Berlin when 8-year-old Bruno (Asa Butterfield from “Son of Rambow”) and his Aryan mates imitate Messerschmitts strafing city sidewalks. When Bruno’s dad (David Thewlis) is transferred to the countryside, the bored lad hunts for a new buddy. Sneaking through a fairy-tale wood, he discovers the boy of the title, 8-year-old Shmuel (Jack Scanlo), behind a high fence with other “farmers.” His innocence is too studied: when a Jewish house slave (David Hayman) says he “practiced medicine” before he pealed potatoes in the commandant’s kitchen, Bruno figures that he must not have “practiced” enough. He also assumes the numbers tattooed on Shmuel’s arm must be part of a game that he wants to play too. In another disingenuous touch, a propaganda film shot in that camp will bring this boy to his senses, but by then it’s too late. In the end, there are two boys in striped pajamas, and then there are none. James Horner’s overdone score and the English-accented cast tilt this Holocaust-for-kids into PG-13 after-school territory. Well-meant but wrong-headed, the film is produced by David Heyman from the “Harry Potter” franchise. Here’s his muddled linkage: “With all the conflicts going on today, whether in Rwanda, Somalia, Palestine, Israel, Darfur, Zimbabwe or Iraq, this story seems to me to be as relevant today as at any time in history.” With Vera Farmiga, Rupert Friend, Amber Beattie, Richard Johnson and Sheila Hancock. 94m. (Bill Stamets)