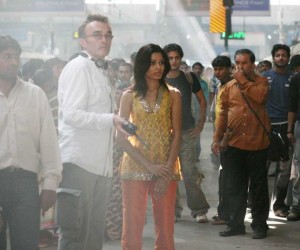 While an Indian friend of Danny Boyle’s tells the director that his “Slumdog Millionaire” won’t be melodramatic enough for audiences on the Subcontinent, its bustling commotion is a fine, generous surprise in this movie year, bristling with romantic notions about love and destiny. It’s a great entertainment, with some of the basic satisfactions of a movie like “Titanic,” in its idealistic, quixotic telling and in the script’s studious prefigurings and refigurings.

Working from a script by Simon Beaufoy, whose credits include “The Full Monty,” Boyle, shooting in HD on practical locations, makes a seamless weave of present and past in the story of an unlikely contestant, an uneducated 18-year-old orphan, on the Indian version of “Who Wants To Be A Millionaire?” “Slumdog Millionaire” is Dickensian in the true sense of the word, filled with poverty and hope, color and conflict, like an “Oliver Twist” scored to M.I.A. (The rich score is by A. R. Rahman, Bollywood’s leading composure, with Maya Arulpragasam’s “Paper Planes” filling the scene at just the right moment.)

The last time I talked to Boyle, I’d only just read about the “Slumdog” project the night before, weeks before he began shooting, and the idea of his working from a Beaufoy script with digital cameras hurtling through the back-alleys of Mumbai sounded propulsive with potential, and I’d told him so. “It’s funny, innit?” he says in his rapid Scots burr, laughing on the morning of his fifty-second birthday. “I’d love to replay that now, if I could see myself talking about it. ‘Cos it’s weird, you go off and make these things. You’ve talked about them before. Luckily, this weird amnesia sets in about things. You do all these interviews and it does make you very self-conscious about stuff, about why you’re doing stuff, in a way that you never think about normally. And yet clearly, you forget it. Because, when you come to make a film? I never think about what I’ve said to anybody about it. Some amnesiac drug sets in whereby you forget the self-consciousness and you go off on this trip of making a film.”

We still haven’t sat down. “Often when I talk to journalists, I sound coherent! You don’t think in that coherent way when you’re doing things; you make sense of them afterwards, don’t you? Patterns emerge about what sounds interesting and attractive. Some of it’s true and some of it is a bit of a fabrication, but basically you work out this way of talking about it, but it isn’t necessarily the way you’ve made the film at all. But fortunately the two are separate in a way. They don’t… My biggest worry, I’ve just been in Austin, where they gave me this award. I’m terrified of things like that, people start talking—”

Is it over, is that what you’re thinking? “They start talking about the ooov-rah, y’know, about the connective tissue of the films.” Boyle cuts a huge grin. “Fuck! It’s like… ahhhh! But fortunately, it all seems to kind of blur away. You have amnesia when you read a script as well. People have been asking about the script and my line on it, which is true, after about ten or fifteen pages, I knew I was going to make it, even though the prospect of reading it hadn’t been particularly attractive. I’ve been saying, the best way to make the decisions is in the middle, not by the time you get to the end. It’s because you have amnesia when you’re reading a script, of actually what problems you’re going to face making it. You forget the realities of filmmaking, money and stars and studios and distribution and locations.” He lets out his boisterous laugh. “You just forget all that, you just think, ‘Awww, this is fantastic! Wouldn’t this be great?’ And then you get on with it. That’s the amnesia thing that helps you. It’s like they say about women having children. They say hormones are released in women that makes them forget the pain. Otherwise women would only ever have one child! Otherwise no one would be insane enough to go back to that level of suffering!”

Now we take a seat. He remembers I asked about the shooting. “Gather round, gather round. So we’re in the slums. We get a couple of little shacks to have the equipment in and it’s full, these rooms would be full of dry ice. This weird image! The hard drive, the Apple notebook that’s on the cameraman’s back was a MacBook Pro. It’s in a suitcase surrounded with dry ice to keep it cool. Not just because of the temperature of India, which, y’know, adds to it. But because they overheat. That’s one of the biggest technical problems we had with it. So you’d have this weird image full of dry ice, like some kind of rock concert! All these assistants handling dry ice with the special gloves or with tweezers. We’d have three or four of these cameras, and they’d be re-supplying them with dry ice. So that’s high-definition filming in the streets of Mumbai!”