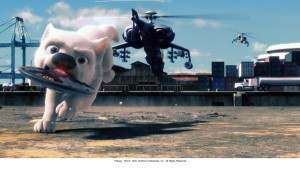 Like “JCVD,” “Bolt” opens with an outlandish action sequence. Spoiler alert: it’s not real. Just a shoot for an episode of a hit TV series starring the title dog (voiced, barked, yelped and whimpered by John Travolta) that thinks it’s all for real. Every week Bolt rescues his plucky owner Penny (Miley Cyrus aka “Hannah Montana”) from evildoers. Like “The Truman Show,” the TV show “Bolt” is shot with hidden cameras. Real-time special effects trick Bolt into believing he really does possess all his super-powers in the script. “If the dog believes it, the audience believes it,” states TV director (voiced by windbag James Lipton from “Inside the Actor’s Studio”). The target demographic wants new plots: “They’re not happy with happy,” reports a network exec. Bolt bolts and gets shipped by a mishap to New York City. He meets sassy kitty Mittens (Susie Essman) and heads back to Hollywood. She brings Bolt up to speed on his life-long delusion, as well as coaching him on how to stick his head out the window of a moving vehicle. A high-strung hamster and super-fan (voiced by Mark Walton) joins the journey. Like the movie-star dog in “Firehouse Dog,” the star of “Bolt” will rescue people in real peril. Directors Chris Williams and Byron Howard, and writers Dan Fogelman and Chris Williams unleash a treat for dog-lovers and haters of L.A. agents and network execs. Walt Disney Animation Studios superbly reproduces behavioral details of puppies and pigeons. But this Digital 3-D feature is needlessly 3-D. The only delight it brought me was second-hand: hearing the squeals of delight when the opening credits startled kids in the audience. With Greg Germann, Malcolm McDowell, Diedrich Bader, Grey DeLisle and Sean Donnellan. 95m. (Bill Stamets)