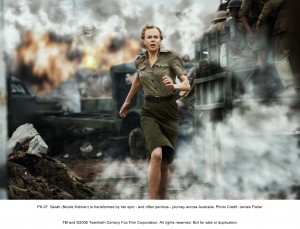 A more traditional film than you might expect from the director of “Moulin Rouge!” and “Romeo + Juliet,” Baz Luhrmann’s massive, exhausting “Australia” tries to be everything at once—a grand love story, an epic exercise that uses landscape as character, a war film and even (and perhaps, foremost) a statement on the tragic consequences of historical racism—to only middling result. On the dawn of World War II, Lady Sarah Ashley (Nicole Kidman) ventures to the exotic country from Britain and inherits a cattle station—before long she’s acquired the help of horse-for-hire countryman The Drover (Hugh Jackman, channeling a Leone-era Clint, at least by iconic styling) to drive 1,500 head of cattle to the shore to defeat the English cattle baron who’s threatening to take her land in selling off meat to the military. Narrated by newcomer Brandon Walters, who plays Nullah, a young half-Aboriginal boy who bonds Lady Ashley and Drover, the film’s bogged down by sluggish pace and drastic length, and Luhrmann can’t seem to find the glue needed to hold together all of these diverse pieces, many of which are successful and even breathtaking. Shot by Mandy Walker, the film’s a visual stunner. Near the end of the picture, during the Japanese invasion of Darwin, Luhrmann is able to find emotional balance between his otherwise unconvincing love story and the devastation of war. He hasn’t completely abandoned where he’s flourished in the past; still musical, “Australia” makes touching use of “The Wizard of Oz”’s “Somewhere Over the Rainbow” to unite the unexpected family he’s constructed. But you welcome the ending once it finally arrives, and the Elton John song during the end credits leaves a goofy taste in the mouth. 155m. Anamorphic 2.40 widescreen. (Tom Lynch)