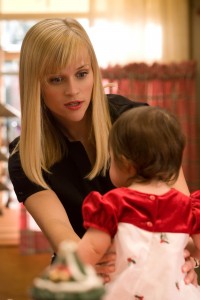 Seth Gordon’s woeful holiday riot, “Four Christmases,” pits Vince Vaughn and Reese Witherspoon as a longtime couple who reject traditional notions of marriage and family because of their own unbearable childhoods and relationships with their parents. After crafting grandiose lies to avoid visiting family on Christmas, the two are caught in the act and are forced—here it comes—to visit all four sets of disparate, dysfunctional parents in one day! Such a deliberate structure could work if the picture wasn’t so offensive. First up, Vaughn’s white-trash father and cage-fighting brothers, who physically attack him without provocation other than that he’s just a pompous asshole who deserves it. Witherspoon’s mother has a house “full of cougars” and grandma talks blowjobs. Mrs. Vaughn has taken up with her son’s (former) best friend and that hasn’t gone over too well. Enter inevitable fight scene between our protagonist lovers, the wise speech at the end by the remaining parent and the kissy-kiss make-up. To complete the formula, sprinkle in a few fat jokes, putting urine inside a child’s mouth and rampant, practically unbridled class-ism, which at one point includes the line “I don’t need you to do that because I actually make more money than you.” Reese Witherspoon shouldn’t be puked on; Vince Vaughn’s charming- abrasiveness shtick has run its course. With Academy Award winners Robert Duvall, Mary Steenburgen, Sissy Spacek and Jon Voight. Oh, and Witherspoon. Gordon’s only other feature is the documentary about videogame competition obsessives, “King of Kong.” 82m. (Tom Lynch)