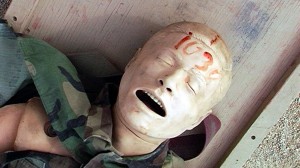 Thomas Pynchon’s got a new novel coming in a few months, and it’s announced as another period-set piece. Seemingly a matter less of needing the long view than not wanting to be tripped up by the niceties and crudities of the blackly absurd historical moment of the twenty-first century, it’s another sign of his daunting intelligence. Different forms of intelligence are on display in Tony Gerber and Jesse Moss’ “Full Battle Rattle,” which describes a reportedly billion-dollar sim city in the Mojave Desert where situations on the ground in Iraq are reproduced, creating not just a setting for training but a kind of theater where Army battalions enact the conditions they’ll face on the ground over there. That’s the strange intelligence of the situation; the filmmakers’ intelligence lies in their understatement, letting the surreal setting largely speak for itself. Philosophical conundrums and concerns remain mostly off-screen. Still, the film’s final revelation makes clear the terrible implications of what we’ve just witnessed. 85m. BetaSP. (Ray Pride)