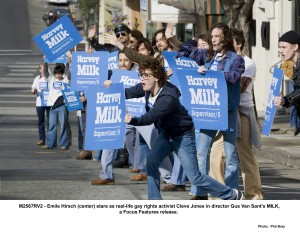 Harvey Milk, the first openly gay man elected to public office in the U.S., was named to San Francisco’s Board of Supervisors in 1977 and assassinated one year later along with the city’s mayor. “Milk,” Gus Van Sant’s powerful and moving account of his career, marks a return to more conventional storytelling after his “Death” trilogy (“Gerry,” “Elephant” and “Last Days”) and last year’s impressive “Paranoid Park.” It begins with Milk (Sean Penn) still in New York, turning 40, sick with the regret of not having done much with his life. He meets Scott Smith (James Franco) in a subway; in bed he promises the much younger man he won’t make it to 50, but they inspire one another still, head west, start a movement. Penn’s monumental, passionate performance anchors Van Sant’s biopic—it’s been some time since the actor, often called the finest of his generation, has played a wholly likeable character—and he’s surrounded by a focused and truly supporting ensemble, with Franco, who is, in ways, the film’s emotional center, and also Emile Hirsch, Joseph Cross, Alison Pill and Diego Luna. James Brolin’s troubled and distressed Supervisor Dan White marks another memorable character and performance in the actor’s resurgence; he’s much more worrisome here than he ever could be as a chuckling George W. Bush. Elliot Graham’s phenomenal editing blends real-life footage and Van Sant’s interpretation with seamless splendor; screenwriter Dustin Lance Black’s structure maximizes Milk’s message. The recent Prop 8 atrocity will be on your mind. “You gotta give them hope,” Milk says. He did. 128m. (Tom Lynch)