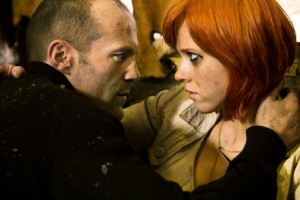 The third film in the “Transporter” series reunites Frank (Jason Statham) with another shiny black sedan. Like his vehicles in 2002 and 2005, this one is customized with changeable license plates to confuse law enforcers, who Frank evades with great élan. Co-writers Luc Besson and Robert Mark Kamen change very little in their formula. In all three action films, Frank sets workplace rules that he rues bending or breaking. This former Special Operations operative (who once operated in Lebanon, Syria and Sudan) is paid lots to transport special packages, and ask no questions. Frank’s package is always the imperiled child of a very powerful man. Bad guys are up to no good with their own transporting: Chinese slave labor, a lethal virus, and toxic waste. Two of the three films end at international conferences. Two have characters pretending to be Frank’s cook. Two drop the names of a novelist: Dostoevsky and Proust. One woman always throws herself at loner Frank. One fixture is sidekick Inspector Tarconi (Francois Berléand) from a small French constabulary. Statham is an appealing cipher with a ripped torso, which he displays in alternating chase and fight scenes. Invariably he recruits the sleeves of his white dress shirt and black suit coat as weapons to throttle, upend and slingshot onrushing thugs. Four or five times per film, Frank gets surrounded by a score of heavies. Here’s where the humor kicks in. Martial arts are the slapstick of the post-Sennett cinema. Instead of cream pies for yuks, there are ludicrous kicks. Private security goons replace Keystone Kops. Director Olivier Megaton steers the action with style from Marseilles to Odessa. Producer Besson never uses the same director twice, but “Transporter” standbys Michel Julienne (car stunt coordinator-choreographer-supervisor) and Cory Yuen (martial arts choreographer-coordinator) are up to speed, if not over the limit. With Natalya Rudakova, Rob Knepper and Jeroen Krabbé. 100m. Anamorphic 2.40 widescreen. (Bill Stamets)