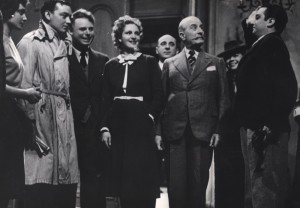 (Regle de jeu, 1939) For years, whenever people asked what my favorite films are, it would be easier to name one than five, and that one is the brilliant, never-tiresome, effortless, farcical, audacious “The Rules of the Game.” I’d say it’s probably also the greatest ever made, which I’ve said almost every time it’s played theatrically in the city, and they’re surprised it’s a glossy, black-and-white upstairs-downstairs French comedy from 1939 that deepens and darkens and tickles and shocks and thrills. But then they hadn’t been able to see Jean Renoir’s “The Rules of the Game.” It’s been out in a Criterion edition for a couple of years, but it would be a shame to miss the images in the only-recently struck 35mm prints, the first in four decades. Comparisons are unnecessary for this posh, skeptical, wry masterpiece that is supremely without judgment: “Everyone has their reasons” is a deep-seated shrug of dialogue, but in the context of the scene, its tragedy, the movie, and its abundant portentousness as Europe is about to darken into a canvas of war, it’s nothing less than perfect. Just go. The superb cast includes Renoir as the ultimate best friend and quietly lovestruck puppy, Marcel Dalio and the regal yet timelessly daffy Nora Gregor. 112m. (Ray Pride)

“The Rules of the Game” plays Friday and Wednesday at Siskel. At Wednesday’s showing, Jonathan Rosenbaum will elucidate as part of the ongoing “The First Transition: World Cinema in the 1930s” series.