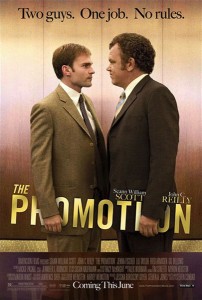 Chicago’s production community is celebrating itself with the Best of the Midwest Awards, honoring movies screened at the monthly Midwest Independent Film Festival, held the first Tuesday of every month at the Landmark’s Century Centre.

Festival director Mike McNamara, who honed his room-controlling skills as host of the Coors Light Maxim Girls Search, fights to be heard above the festive crowd as he kicks off the awards ceremony. “You’ll have so much time for socializing in thirty short minutes,” he pleads.

The first presenter, Channel 9’s Dean Richards, shushes the crowd into submission. “It’s for the winners,” Richards says. “I spend so much of my day watching crap and reporting on it for the WGN news. It’s gratifying to see all of this great work coming out of Chicago.” Richards gives the Best Short Film award to Keith Bearden for his culture war comedy “Train Town” starring former “Wild Chicago” host Will Clinger.

The big winner of the night is “The Promotion,” first feature film by screenwriter Steve Conrad, who wrote “The Weather Man” and “The Pursuit of Happyness.” Seann William Scott plays a supermarket assistant manager in an epic battle with John C. Reilly to manage a newly opened store.

Conrad reads an emailed acceptance speech on behalf of Best Actor winner Reilly. “It’s about time Chicago toots its own horn” with the BMAs, Conrad reads. “Chicago has given so much to independent film, from Kartemquin to Steve Conrad.”

“I’m so pleased to get this at home,” Conrad says, accepting the Best Director award. “I fought hard to shoot here instead of Canada. We lost some of our ad budget, but we got to work with Chicago actors and Chicago musicians. I got writing awards before,” Conrad continues, getting emotional. “But I grew up wanting to be a movie director, and this is my first directing award.”

Richard Roeper appears to have been enjoying himself when he takes the stage to present the Best Film award. “Dean was saying ‘shh, shh,’” Roeper swaggers. “I’ll just say, with all due respect, shut the fuck up.” But Roeper has kind words for the crowd, too: “I’d like to present the award for best-looking audience, ever—right here,” he says, before handing “The Promotion” the big prize, to resounding approval.

Chicago’s film industry has good reason to celebrate: the state legislature just jacked up the Illinois Film Tax Credit, boosting the return on local productions from twenty percent to thirty percent of qualifying in-state expenditures, and removing the annual expiration clause that has made it so hard for Chicago to get long-term commitments from studios to make movies and especially TV shows here.

“It’s great to be an independent filmmaker in Illinois tonight,” says Illinois Film Office director Betsy Steinberg. The expanded tax credit “is really going to grow this sector of our industry,” she says.

State senator Ricky Hendon, a sponsor of the Film Tax Credit, succinctly sums up the mood in the room: “Lets get it on,” he says, “and get our drink on.” (Ed M. Koziarski)