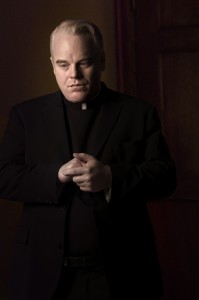 John Patrick Shanley is a fine writer. A fine playwright. A Pulitzer Prize-winning, Tony-winning, Oscar-holding writer who’s overcome his share of setbacks (including a savagely panned musical that opened recently in Manhattan) to continue to be both assured and prolific. As a writer. “Doubt” is a cloistered passion play about ambiguous doings in a setting much like the neighborhood of Shanley’s own Bronx upbringing. In 1964, Father Flynn, a winning, progressive priest (Philip Seymour Hoffman) is suspected of being too close to an African-American student. (Viola Davis’ brief turn as the mother is electric.) Accusations fly. The principal, Sister Aloysius Beauvier (Meryl Streep) has opposed him in the past, resisting the changes in the air and the church that he represents. Heated dialogue ensues; it’s juicy and Streep’s performance is gorgeously shaped, building from archetype to revelation over the course of the film. Cinematographer Roger Deakins is one of our best, but he doesn’t make Shanley, the fine writer, even approach being a fine, cinematic film director. On location, a tilted angle can be useful for multiple suspenseful ends, or to “frame out” an offending element, but in Shanley’s case, the impact is dubious at best, detracting from the wrought dialogue. 104m. (Ray Pride)