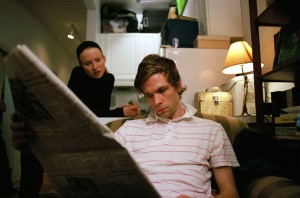 “Let Them Chirp Awhile,” NYU grad Johnathan Blitstein’s Lower East Side-set mini-indie has an aspiration that’s foiled a few filmmakers over the years: to capture the romantic roundelays of smarties in the city, to get tart talk into play without falling into mannerism or smugness. That would be… making a retread of Woody Allen’s movies, y’know, the funny ones? That’s a pitfall the filmmakers have to fear, yet Blitstein is pretty fearless in portraying the elemental ridiculousness of his comic caricatures while providing sufficient plot to keep an able, well-chosen cast from shuffling or mumbling through their shortcomings. A key, underplayed line: “I can’t even concentrate when you’re not talking to me.” Crass behavior ensues, to often engaging result. With Justin Rice (from Andrew Bujalski’s “Mutual Appreciation”), Brendan Sexton III, Laura Breckenridge, Zach Galligan and the fetchingly named Pepper Binkley. The location work is sweet, especially since the film was shot on 35mm stock. Among the film’s festival honors: Best Feature, East Lansing Film Festival. 91m. (Ray Pride)