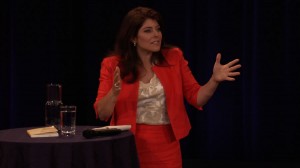 One of the most startling books I’ve read this year is Naomi Wolf’s “The End of America,” an engaged, furious polemic about the similarity of authoritarian impulses in this country after 9/11 to those of fascist regimes like in Italy and Germany before and during World War II. Even more startling than Wolf’s conviction in prose is her spirit in person: when I introduced her at a Q&A last month at Doc/Fest in Sheffield, England, it took only one question for her to extend what the audience had raptly watched on screen to fill the entire allotted time as she articulately elaborated and footnoted her concerns. Annie Sundberg and Ricki Stern’s documentary, coming after “The Devil Came On Horseback” and “The Trials of Daryl Hunt,” sounds small, essentially following Wolf on a national tour to talk about the book and the issues facing a fearful, readily swayed country. The ideas are big. The fear is large. The film, being distributed on campuses and cinematheques before an Inauguration-timed DVD and online release, is a patriot’s articulate cry. 75m. BetaSP. (Ray Pride)

“The End of America” opens Friday at Facets