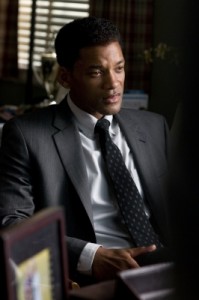 While the direction of “The Pursuit of Happyness” and “Seven Pounds” doesn’t match the pitched tumult of Italian writer-director Gabriele Muccino’s 2001 “The Last Kiss” (L’ultimo bacio), his work is inescapably Italian in temperament. Will Smith’s choice to collaborate with Muccino again on screenwriter Grant Nieporte’s first produced script is inspired: this rollercoaster of sentiment and contrivance would not hold half the charm or a seventh of the emotion in cooler hands. Shameless melodrama ensues. A feel-good tragedy about survivor’s guilt—the literary allusion in the film’s title and the opening scene make the stakes clear within moments—”Seven Pounds” is near-dazzling when each and every strand finds satisfactory resolution. A number of the important shifts in the story, however, shouldn’t be implied through synopsis, although the script’s tidiness is marked. Simply put, Smith plays a troubled man who seeks to make amends for a tragic incident in his past by helping seven strangers he’s taken pains to find. Taken as real-life psychology rather than taken as clever construction of the splinters of information we’re offered, his deeply troubled (and troubling) behavior makes madness quickly evident. But the matters of privacy and intimacy and sacrifice are broached with fierce metaphor. Does this man seek the transformational powers of a God? Or the transubstantive character of Christ? Moments that seem repellent or skin-itching redeem themselves as the layers of the parable are peeled away. Rosario Dawson, as one of his charges of whom he grows unwisely fond, an often-underrated performer, gives what is surely her most moving, mature performance yet. With Woody Harrelson, Michael Ealy, Barry Pepper, Judyann Elder. 123m. Widescreen. (Ray Pride)