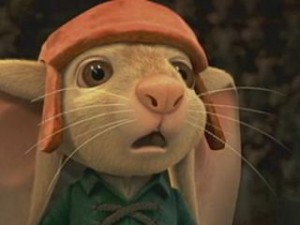 A tiny mouse with unusual tastes is the star of this children’s tale made with uncommon craft. Despereaux (voiced by Matthew Broderick) has an un-mouse-like love of light, music, reading and Princess Pea (voiced by Emma Watson). He undertakes a quest that will remake the kingdom for rodents and royals alike. The painterly style of this lovely animated feature refers to Old World parchment, thread, and fairy tales, not state-of-the-industry software, tie-ins and fart jokes. It’s also an anomaly for articulating humanist values, a reading enhanced by the choice of Sigourney Weaver as the narrator. (Who better to map a land cursed with fear upheld by tribunals?) In a let-me-tell-you-a-story manner, she makes knowing asides to viewers, just like the original narrator of “The Tale of Despereaux: Being the Story of a Mouse, a Princess, Some Soup, and a Spool of Thread.” Author Kate DiCamillo asked “dear readers” to pause on key words in her 2003 book: “quest,” “chiaroscuro,” “perfidy” and “empathetic.” (DiCamillo’s “Because of Winn-Dixie” was earlier adapted to the screen.) “Despereaux” director Sam Fell displayed a knack for handling caste-conflict in the realm of rodents in his “Flushed Away” (2006), and here relates the distinctive cultures of meek mice and nasty rats. Co-director Rob Stevenhagen is an animator making his directing debut. Writer Gary Ross lends a lighter touch than felt in his more pedantic “Pleasantville,” another allegory of outcasts, esthetes and liberators. With uplifting whiffs of savory soup, “The Tale of Despereaux” champions storytelling as the light of the world, from torture-racked dungeons to castle spires, a land where a mouse scampers across the words “Once upon a time…” all the way to “… happily ever after.” And Despereaux makes it just so. With the voices of Dustin Hoffman, Tracey Ullman, Kevin Kline, William H. Macy, Stanley Tucci, Ciaran Hinds, Frances Conroy, Frank Langella, Richard Jenkins and Christopher Lloyd. 94m. Widescreen. (Bill Stamets)