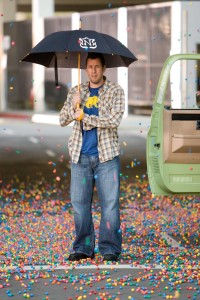 Adam Sandler lets his fans down in “Bedtime Stories.” Jim Carrey did likewise in last week’s “Yes Man.” Neither star breaks new ground or matches his past comic product. Sandler’s Skeeter is another immature nice guy with a mean streak. Once again, he has a workplace issue. Another case of arrested mobility. Plus no love life. Skeeter is the handyman at a fancy hotel he ought to manage. His dad raised him and his sister at a modest comfy motel that was bought out by Barry Nottingham (Richard Griffiths), who promised the kid would one day run the glitzy hotel he planned to build on the site. Years later, it’s the snotty boyfriend (Guy Pearce) of Nottingham’s ditzy daughter (Teresa Palmer, playing a sorta-Paris Hilton) who’s in line to take over. Skeeter gets a shot at getting what’s his when he starts babysitting his sister’s kids for a week. As he makes up interactive bedtime stories, the tykes script tangents that come true the next day. So Skeeter steers the storylines to get him both the job and the girl (Keri Russell). Director Adam Shankman (“The Wedding Planner”) handles the crossover between make-believe and the real world with no wit at all. The finale is by-the-book formulaic, except for a mean-hearted humiliation inflicted on two formerly imperious schemers. This is Tim Herlihy’s eighth screenplay for Sandler. The story comes from co-writer Matt Lopez, who needed Skeeter’s inventive niece and nephew in his rewrite corner. With Russell Brand, Jonathan Morgan Heit, Laura Ann Kesling, Courteney Cox, Lucy Lawless and Carmen Electra. 95m. (Bill Stamets)