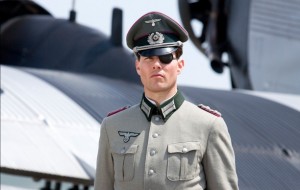 United Artists’ poster sports a mostly vertical red band with two ninety-degree turns that create a horizontal jag. It does not look like a swastika, but there’s enough to trigger the mind’s eye to add a right and a left angle or so, and fashion the Nazi icon from the abstract graphic. No such mind games are in play when reading the boldfaced schematics of “the good German” and “ten righteous men” in the screenplay by Christopher McQuarrie and Northwestern grad Nathan Alexander. After directing two “X-Men” films, Bryan Singer knows all about renegades engaging über-foes. Evil, in this telling, is signaled by an extreme close-up of a mosquito incinerated by the burning tip of a cigarette wielded by a Nazi sentry. This pulsing thriller stars Tom Cruise (“A Few Good Men”) as Claus von Stauffenberg. Seeing himself as a true patriot, he delivers a briefcase bomb to a briefing with Adolph Hitler on July 20, 1944. If the meeting had not been relocated from a stifling underground bunker to a room with open windows, the explosion would have killed Hitler. Stauffenberg spearheads a coup attempt by mobilizing Hitler’s own anti-coup mechanism, known as Operation Valkyrie. “Long live our sacred Germany!” cried Stauffenberg before his execution by firing squad. Last year his son Berthold told Der Spiegel: “It is unpleasant for me that an avowed Scientologist will be playing my father. … I fear that only terrible kitsch will come out of the project.” Yes, but is it ennobling kitsch? An end title states there were fourteen other “known” attempts to assassinate der Fuhrer, should Singer have more operations in mind for the screen. With Kenneth Branagh, Bill Nighy, Tom Wilkinson, Carice van Houten, Thomas Kretschmann and Terence Stamp. 120m. (Bill Stamets)