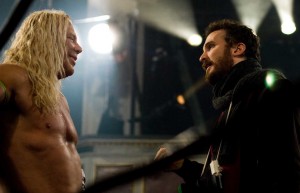 “The world doesn’t give a shit about me. I’m here. I’m really here.” I don’t know all the implications that can be wrought from this great line in “The Wrestler,” an original script by Robert D. Siegel, a former editor of The Onion. But self-pity is never part of it. Mickey Rourke, a thousand punches, blows and self-lacerations since his pretty-boy days of “Diner” and “Rumble Fish,” is the fleshy center of Darren Aronofsky’s movie, passion played again and again. Simple and unadorned, it’s both tragic and touching. Rourke plays “Randy the Ram” Robinson, a professional wrestler in his early 50s, living day-by-day, match-by-match, pill-by-pill. He’s a lonely man. Rourke plays him without vanity, unless you consider the vanity of stripping to muscle as if muscle were bone. One of Randy’s great hopes is getting closer to “Cassidy” (Marisa Tomei), a stripper he frequents. Tomei’s quietly fierce performance keeps stripper clichés at bay. There are jokey references to “The Last Temptation of Christ” as they banter in the club’s space to the side. The rending of flesh is made particular. It both diminishes and embellishes Randy’s ground-level transfiguration. And quickly, quietly, it sneaks in—you realize that “The Ram” and “Cassidy” are mirrored: merchants of flesh, exploiters of their own bodies, right past their prime. It’s a powerful duality, especially within the actors’ mutual lacks of vanity. Later, there’s a gag with a small kid who’s bored by the Nintendo game that featured Randy: pixels past prime. Steeped in sorrow, mingling overstatement and understatement, “The Wrestler” is smart, goofy, heartening entertainment. With Evan Rachel Wood, Todd Barry, Mark Margolis. 109m. Widescreen. An interview with Aronofsky will appear next week. (Ray Pride)