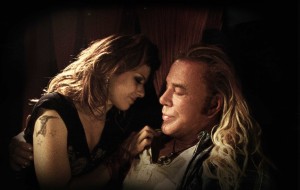 Angel-feather tats twine a stripper’s back; twinned, a wrestler’s is lined with scar, knotted by scarification.

“The Wrestler” sears because of its two central roles, Mickey Rourke as Randy “The Ram” Robinson, a beat-down wrestler in his early 50s, and Marisa Tomei as “Cassidy” (nee Pam), a stripper he feels close to as the walls of his life close in around him. Brave and sometimes literally naked: they make a tremendous match as performers. And that dovetailing seems a suitable fit for the films Darren Aronofsky’s made so far: Try as the mind might, thought cannot save the flesh.

The Ram, Aronofsky says, “loves what he does and he’s got that going for him. What’s the theme—how do you make a movie about wrestling? Everyone says, ‘Oh, wrestling’s fake, why do you want to make that?’ But that becomes the theme, what is real and what is fake? That became the big challenge of the Ram character in the movie. Where is his real world and where is his fantasy world, and has he confused them? And that carried us over to the stripper story and her really clear lines between what is real and what is fake.”

From the start, Tomei’s substantial qualities as an actor forestall the fear of stripper clichés. And once the two of them are circling each other, you realize that at that point in their lives, they’re mirrors: Merchants of flesh, exploiters of their own bodies, just past their prime.

“Yeahhh…” Aronofsky says, pausing. “When you do an independent film, with a stripper, all the red flags go up, ’cause you’re like, ‘Oh shit! Why am I doing this?’ I remember fighting with myself and with the writer, what else can she be, what else can we make her? But the attraction of how similar they actually are: They both have stage names. They both dress up. They both create a fantasy for the audience. They both use their bodies for their commerce and age is their enemy. Those connections between the two of them were just too delicious to want to live without.”

The movie was under most filmgoer’s radar before its Venice première, where it won the Golden Lion. “Yeah, it was instant acclamation, to be honest,” he says. “We finished the film two days before Venice. We were mixing. We finished the mix like a week and a half before, and then there’s a lot of tech things that have to go right, the sound and image have to get married, you have to check prints to make sure the color’s right. It was very last minute, then we had to get it over to Rome to get it subtitled. That last week was quite a rush job to get it done. Only a few people had seen it at that point. Of course, the Venice festival had seen it and invited us to attend. But we didn’t have any sense of what the audience reaction would be. We landed in Venice and then a day later we did the press conference, and the press gave us a standing ovation, which I guess they don’t do. It just took off from there. It was a rocket ship. I don’t think anyone was ready, me, Mickey, anybody. We all had high hopes.” Or else you wouldn’t have struggled so hard to make the thing, and to make it with the almost-impossible-to-finance Rourke. Aronofsky thinks. “For me it was always a portrait film, a character study. It’s not filled with politics; it’s not filled with the obvious heartstrings. It was a real chance for me to work with who I thought is one of the great actors of our times. It was a unique world. I think what I learned, my lesson, was that all you need is an honest performance and a lens to make a good movie.”

The film’s use of austere locations, including perhaps the last pay phone in New Jersey and a deserted boardwalk, seem to gain from budgetary restriction. But in fact it’s almost as if what could be just a painful necessity becomes part of the palette of the film. “Definitely, that’s always been my school of filmmaking, you turn your limits into your strengths. You really identify what you can do and you push it as hard as you can and then within that kind of circle, you create as well as you can what you can do.”

“The Wrestler” is now playing.