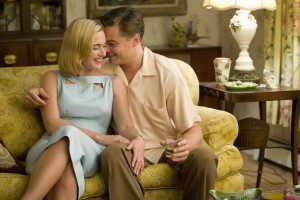 Fans of Richard Yates’ elegant, cold-hearted, bitter, angry, unforgettable novel have begun pouring out reminiscences of discovering its brutal charms while summering at writers’ colonies and inveighing against its screen adaptation (written by Justin Haythe, directed by Sam Mendes). “Revolutionary Road” is a great novel, but so acid that to fully reflect Yates’ brimstone would be near unendurable. While the death of dreams is one of Yates’ subjects, Mendes’ version more reflects the death of a marriage in suburban 1955. Leonardo DiCaprio captures a certain amount of doubt in his playing of Frank Wheeler, but it’s Kate Winslet who embodies fearfulness and a bite of madness with essential gestures. It’s a tremendous performance, capturing timorousness but also a streak of desperation borne of inchoate miseries (whether of will or failure of will or incipient madness). Michael Shannon plays a neighbor’s son, briefly brought out of the madhouse to speak unspoken tensions, a crackling performance: “You want to play house, you’ve got to have a job; you want to play very nice house, very sweet house, then you’ve got to have a job you don’t like. Anyone comes along and says ‘What do you do it for?,’ he’s probably on a four-hour pass from the state funny farm. Agreed?” Zoe Kazan’s quiet sleepwalker of an office co-worker who cheats with Frank is more graceful and equally compelling. Some of the most combative scenes draw almost exclusively from Yates’ written dialogue, with word changes for economy more than “updating.” I’m fond of Thomas Newman’s scores, but this is one is far more foreboding than, say, for “Wall-E” or “American Beauty.” As shot by Roger Deakins, Mendes’ camera style is simplified, often choosing a more theatrical, tableau-style presentation than working with editing or extended camera moves, a choice that highlights performances down to the cold, cold final shot drawn directly from the novel. With Kathy Bates. 119m. (Ray Pride)