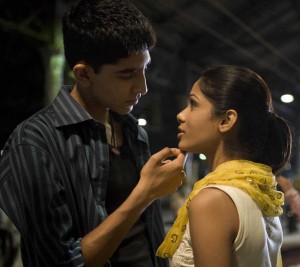 The stockings are still hung by the chimney with care.

Surveying a couple hundred year-end lists by movie reviewers and entertainment writers can be a soul-squishing thing, particularly if you read the reasoning and rationales, the dithers, the doubts, the demurrals, the dishing and dashing to and fro, recurring, recurring. Oh, that’s what “The Dark Knight” was about! (No, it wasn’t, but thanks for watching.) Oh, that’s why “Slumdog Millionaire” is so special! (Um, where’s the fun? Fun? Energy? Bold colors? Remember.) That’s why “Wall-E” is the best movie since, in, well, since, ever! And doesn’t Eve deserve a best actress nomination? (I can’t get animated. Sorry. An hour of the apocalypse followed by this week’s adventure with The Inedibles?)

It was years ago, a bit, I will concede, before the turn of the century, the dawn of the millennium, but I do remember when I was a moviegoer on the street corner, looking up at the marquees of the Cinema or State-Lake, the Oriental or the Granada, the Sandburg. The Sandburg… whose cinephile operators went on to respectively produce “Election” and “Little Miss Sunshine” or “Milk” and “Synecdoche, New York.” I’ll even get teary going past a storefront recognizable as having once been a neighborhood theater. Say, the Wicker Park, now the John Fluevog store on Milwaukee Avenue below North Avenue, or the Parkway, now an optical store just south of the Landmark Century.) Those were the days. Those were the days. Stale smells and bright lights and furtive goings-on in the balcony. Civilian cinephilia: by this time of the season, I would not have had the chance to have seen all the films, or the privilege to have seen some movies several times before they hit Chicago. That was also before the epoch of knowing a movie would usually be available for rental eighty days after its release, dropping neatly through the mail slot the afternoon of its street date if you were one of the subscribers picked out of the Netflix queue.

I’m not sure how the experience a 22-year-old civilian cinephile who’s not visibly, volubly blogging his or her little heart out would simmer in today’s distribution picture. I do know a video-besotted bunch of talented amateurs, but they’re knowing as hell. The average moviegoer, though, may be confused by the return of the “platform release.”

Less a matter of being parsimonious than returning to canny marketing of the past years, distributors large and small have taken their sweet time in releasing movies, whether a matter of them not having come to Chicago at all yet, or perhaps only on a couple of screens for a week, two, three. Universal did its work releasing Clint Eastwood’s “Changeling” a few months back, a bigger picture, with a star (Angelina Jolie) in a star performance in the middle of it. It was released in hundreds of theaters. Didn’t do all that well. Now Warner’s got “Gran Torino,” a smaller, darker, profane, sometimes mad Eastwood picture. The powers that be seemed to have watched that disappointment as well as the platforming of movies like “Slumdog Millionaire.” The figures say Eastwood’s purported last acting role is only at eighty-four theaters, but goes to about 2,250 this weekend.

“Slumdog Millionaire,” on over 100 best-of lists, brightens only about 600 screens. (An oddity: Warners, who turned most of the rights to “Slumdog” over to Fox Searchlight later this month releases “Chandi Chowk Goes To China,” a Chinese-Bollywood comedy hybrid in a few dozen theaters.)

Does the anticipation build? Or are audiences, pounded by politics, going “eek!” about the economy mentally changing the channel? In Chicago, for the early weeks of some releases, the committed theatergoer gets to know well the smell and sound of AMC’s River East multiplex.

Sometimes I don’t want to be in my own shoes, but I’m glad my post-collegiate years as a filmgoer are tied up in my edifice complex, remembering without trying not just where I saw a movie for the first time, but often the seat where I sat.

A young film lover can buy and rent and download enormous chunks of the medium’s history, but the present tense is my concern. When does movie-watching become merely curatorial, a decadent arraying of lovely narratives and unmatchable images that can no longer be produced because of all manner of economic factors not worthy listing here.

Take “Watchmen.” Tied up in a very serious legal action caused by some bad lawyering: but the politics-charged Japanese trailer was released online Tuesday. Nixon and Kissinger in a Stanley Kubrick-Ken Adam war room? Lovers in the desert kissing in front of the rising orange bloom of nuclear irradiation? One more corner to loiter on. How soon is now?