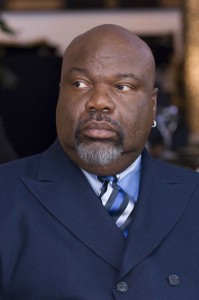 “Many women never hear a male’s point of view on relationships,” claims Bishop T.D. Jakes, owner and operator of a megachurch in Dallas. This media entrepreneur peddles the male-positive DVD “He-Motions: The Message,” released the same year as his novel “Not Easily Broken.” This pro-husband, pro-dad, pro-coach, pro-church film is adapted by Brian Bird (“The Last Sin Eater” and twelve “Touched by an Angel” episodes) and directed by Bill Duke (“Hoodlum” and “Sister Act 2: Back in the Habit”). Jakes is all about the trite sentiment, as testified by his DVDs titled “It’s About the Faith Stupid” and “Keeping the Main Thing, the Main Thing,” and by dialogue like “Don’t go all ‘Waiting to Exhale’ on me, girlfriend” and “Don’t make me go Oprah on you, because I will.” In “Not Easily Broken” characters also say, “It’s hard to keep the good in a good marriage when bad things happen,” and one voiceover even asks, “Why do bad things happen to good people?” Dave (Morris Chestnut) and Clarice (Taraji P. Henson, “Hustle & Flow,” “The Curious Case of Benjamin Button”) are a childless Los Angeles couple in crisis. A few years back, his leg injury ended a pro ball career, so now he’s a small-time contractor driving a pickup and coaching little league. Her leg injury is caused by a car accident that sidelines her hot real estate career. That new Escalade is no longer in the budget. But a physical therapist (Maeve Quinlan) is around to get Clarice back on her feet. On the side, this single mom comforts Dave, who starts playing dad to her son (Cannon Jay). Avaricious Clarice and her malicious move-in mother (Jenifer Lewis) make for an ugly-hearted tag team of Dave-haters. Will this good man get the chance to be the best dad he can be? Will his bad wife go to church, see the light, listen to her pastor, throw out her mom and bear the child of her strong, decent, sweet and sexy man? Yes. Amen. With Eddie Cibrian, Kevin Hart, Wood Harris and Niecy Nash. 100m. (Bill Stamets)