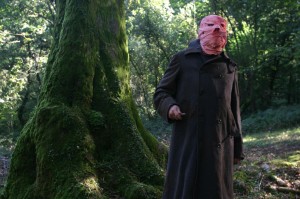 Like an altogether different movie also opening this week, “Virtual JFK (Vietnam If Kennedy Had Lived),” Nacho Villagondo’s “Timecrimes” (Los Cronocrímenes, 2007) toys with the notions of “what if only…” With almost as much invention as the underrated “Primer” but with slightly less force than “Groundhog Day,” the tricksy-turvy narrative definitely takes a jaundiced view toward the notion of free will. Are there choices we didn’t make? Would things have been different? Héctor (Karra Elejalde) and his wife Clara (Candela Fernández) have moved into the countryside in the north of Spain; surveying his new domain with binoculars, Héctor quickly becomes interested in the sight he catches of a woman in her twenties (Bárbara Goenaga) taking off her clothes. Once Clara’s out of sight, Héctor heads into the forest… Complications and fearsome scissors ensue. Let’s just say he gets several chances to wholeheartedly fuck things up. It’s a worthy follow-up to his 2003 Oscar-nominated short, “7:35 in the Morning,” which you can find online. From Magnolia Pictures, which also released “Let the Right One In.” 88m. (Ray Pride)