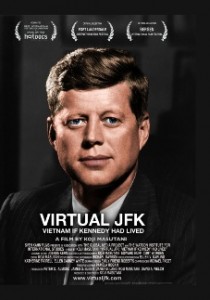 Koji Masutani’s “Virtual JFK (Vietnam If Kennedy Had Lived)” is an intriguing array of counterfactual arguments, taking up in documentary form the argument that Kennedy’s prior decisions indicated that his course in the Vietnam War would have been as disastrous as anyone else’s. Drawing on Harvard historian Niall Ferguson’s notion of “virtual history,” Masutani examines six episodes when Kennedy’s decision-making process was demonstrated and essentially ventures the question, “Does it matter who the president is when it comes to war?” With John F. Kennedy, Lyndon B. Johnson, Robert McNamara and co-producer-historian James G. Blight. The memorable takeaway? Footage of Kennedy engaging in pitched battle at news conferences and remaining cool and cogent. 82m. BetaSP. (Ray Pride)