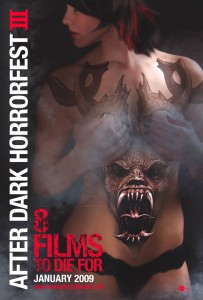 Just around a dark and ominous corner lies “HorrorFest,” a one-week film festival showcasing the best of After Dark Films’ independent horror scene. The festival, aptly titled “After Dark HorrorFest: 8 Films to Die For III,” showcases eight films spanning the spectrum of the horror genre—from straight-up gore to the supernatural—and the event is hosted in every major city in the United States from Boston to Chicago to Los Angeles.

Speaking with Courtney Solomon, CEO of After Dark Films, I got to hear a bit straight from the horse’s mouth about why After Dark started the fest in the first place, and what fans should expect every year when they head to the theaters to gorge their eyes upon ghouls and gore. “I had just done my first horror movie as a writer/director/producer and released it myself through After Dark, and after that we went through Lions Gate and kept watching horror movies and seeing ones that were just about good enough to see individually on their own,” Solomon says on the origin of the festival. “Seeing all these different films that piled up got us thinking, ‘Why don’t we just make a festival?’, and do it for, like, a week. And basically, people could just go see it for one weekend and have it be like a “Rocky Horror”-type event.”

And what does After Dark hope to get out of the festival each year? Not money, Solomon says. “The theatrical event is just an event for the fans purely. We don’t expect to make a ton of money on that—we do that so that the fans can go see the films the way they were intended to be seen on the big screen. From there it goes to DVD and the Sci-Fi Channel and such. What we expect is to make the fans happy, quite frankly, and then it does its regular business on DVD and such. It’s been very well received by the horror community because they know it’s for them.”

And to choose only eight films out of a couple dozen submissions each year must be a daunting task. Though After Dark does not accept unsolicited submissions, you can be willing to bet that they still receive a notable amount from agents around the country, not to mention the films that After Dark themselves scout for. “It’s a long process,” Solomon says. “We go to all the other film festivals like Cannes and Sundance and as films get done we screen them. We have a goal to represent all of horror in the festival through the films. We look for the most unique, interesting ones available.” He also mentions that he’d eventually like the festival to be autonomously driven. “The idea is to eventually get to the point where we give eight filmmakers the opportunity to make different films. Basically what we’ve done the first two years is just acquired the films. We screen them, and if we like them we buy them for the festival. This year it’s a combination of five films bought and three were actually made for the festival. Hopefully by year five we want to make all eight of the films.”

All of the above sounds like a great opportunity for low-budget, independent filmmakers to bring their names to the fore and gain some attention for their films. If After Dark can reach its eventual goal, a fresh pool of talent can begin to be stirred every year when the production of HorrorFest begins.

In the end it’s all a great deal of fun, Solomon emphasizes. “We put out other larger released individual horror movies and we make bigger movies. This festival we put on because it’s slightly profitable at the end of the day [with DVD sales], but mainly we put this on so that we can be one of the horror companies that actually does something good for the horror community. We have access to all this new talent in a pool of filmmakers, so it’s a good test ground for establishing talent and making bigger films down the road because there’s a lot of volume on a daily basis.”