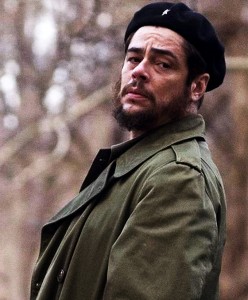 Steven Soderbergh’s attitude toward his biography of the two most significant passages in the life of Che Guevara as an Argentine doctor transformed into guerilla fighter—Cuba, Bolivia—is that a movie on such a freighted, fraught subject that did not offend one set of bystanders or another wouldn’t be very good at all. What he’s done is create two distinctly different movies (which were once, post-Cannes, pre-Toronto, two movies called “The Argentine” and “Guerilla”) with a fierce central performance (by Benicio del Toro), which deal with the process of social transformation, one successful in its moment, the other a failure and fatal. At one point in the years it took this approach to make it to the screen, Terence Malick was slated to direct. Soderbergh compares the poetic, jungle-mad version Malick might have crafted to his own style, with the two films we have now as “a blunt instrument.” Shot with a prototype digital video camera that was in his hands for only hours before going to South America, Soderbergh as director, cinematographer and camera operator does amazing things: the textures of the visual style derive from documentary but have their own fresh way with surface; the intimacy of the camerawork is tactile even in the moments of disenchantment, and his decision to keep Che within groupings in the frame—in a social context, within the struggle, within the battles, let’s say—rather than isolated as a singular protagonist, as a “hero” on his personal “journey,” which would be the fashion in a conventional American film biography, is canny and key. Too much cannot be said about Alberto Iglesias’ remarkable, beautiful score, which provides emotional undercurrent and patches of mood to sometimes-austere passages. The politics? Viewers will bring their own. “Che”‘s takeaway? Process works until it doesn’t. Transformative intelligence persists. The rest of us die or are killed. And Del Toro? Si. Si. Si. (Ray Pride)

“Che: Special Roadshow Edition” opens Friday at Landmark Century, commercial- and trailer-free, with souvenir booklet and a thirty-minute intermission. Soderbergh and I talk about the use of the prototype RED camera here.